Feature: Monette McKay of Mamma Mia at The Bushnell 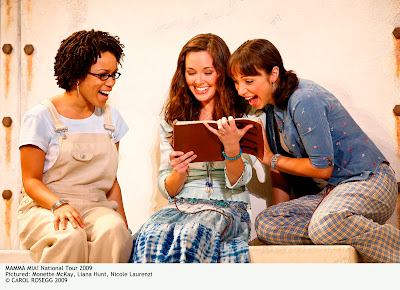 Monette McKay, at left.
Fans Know it by Heart, but Mamma Mia Was All New for Cast Member
By Lauren Yarger
Fans flock back year after year when their favorite musical featuring the songs of Abba makes a stop at The Bushnell, but for one person at The Bushnell next week, Mamma Mia is a fairly new experience.

She’s cast member Monette McKay, a recent college graduate who has been a member of the touring cast for a little over a year. Playing Ali, a bridesmaid to Sophie, whose wedding and quest to find her real father form the basis for the show’s plot, gave McKay one of her first professional gigs and her Equity card, but prior to getting the part, she hadn’t even seen the show.

“I saw the show when I got the job,” she confessed, feeling that she ought to experience the phenomenon that fans can get enough of before she joined the tour. She also only knew a couple of Abba’s songs previously, but now tunes like “Dancing Queen,” “S.O.S.,” “Super Trouper,” “Take A Chance on Me” and “The Winner Takes It All” have become part of her every-day life.

Life on the road has been a new experience for the New Jersey native as well, who spoke to Connecticut Arts Connection from Alabama where the tour stopped before heading to Hartford. Living out of a suitcase and having a readymade “family” of 28 with whom you work, play and live around the clock is definitely a change for the Staten Island Wagner College graduate and dance major who was named the recipient of the Paper Mill Playhouse’s Rising Star Award two years in a row.

“I miss taking (dance) classes,” she said, but does enjoy some of the opportunities life on the road offers. “We get to see some pretty amazing places,” though she lamented that not all of them have a Starbucks.

McKay has tapped into her dance talents a little by teaching master classes in various locations and by helping with dance auditions for the show. She particularly enjoys parts of the choreography for Mamma Mia which call for improvisation by the performers.

Her character, Ali, is mischievous, but also serious, she said, and she’s fun to play, especially in the opening number, “Honey, Honey,” which gets the show off to an energized start.

“People just love this show,” she said, and some of the most die-hards who see it again and again have told her that the current cast is their favorite.

Next week in Connecticut, the road will seem a little less lonely as a close friend of McKay’s who is studying at UConn will come see the performance.

The show plays its fourth run at The Bushnell Dec. 1-6, 2009 with performances Tuesday through Thursday at 7:30 pm, Friday and Saturday at 8pm, Saturday and Sunday at 2 pm and Sunday at 7:30pm. For tickets or other information, visit http://www.bushnell.org/.

Posted by LaurenYarger at 2:18 PM