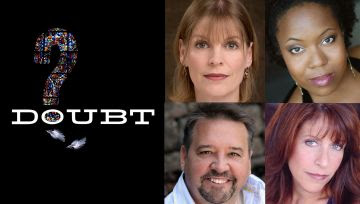 Smaller Role is the Standout in this Production
Don’t miss Lynnette R. Freeman (top right) as Mrs. Muller, the mother whose son might be being abused by Father Brendan Flynn (Jim Schilling) in Music Theatre of Connecticut’s presentation of John Patrick Shanley’s Pulitzer Prize-winning play Doubt running through Sunday.

Freeman’s performance, directed by Kevin Connors, MTC’s main stage executive artistic director, is the highlight of this production and is hands-down the best I’ve seen in that role. She’s gripping as the mother torn between wanting to protect her while trying to give him the best chance to succeed in life.

Katie Sparer plays Sister Aloysius Beauvier, the nun who believes Father Flynn is guilty of the abuse, but has no proof. She confides in a young innocent nun, Sister James (Marty Bongfeldt), who has her own doubts about whether the boy, a student in her class, was abused or whether Sister Aloysius is blowing thinks out of proportion.

Scenic design and stage management are by David Heuvelman; lighting design is by Graham Kindred and costume design is by Diane Vanderkroef. Performances are Friday at 8 pm, Saturday at 4 and 8 pm and Sundays at 3 pm. Tickets are $40 for adults, $20 for seniors and students, and reservations are suggested. For reservations or more information, call Music Theatre of Connecticut at 203-454-3883 or visit www.musictheatreofct.com.
--Lauren Yarger
Posted by LaurenYarger at 5:05 AM