South Pacific Breezes in to the Bushnell 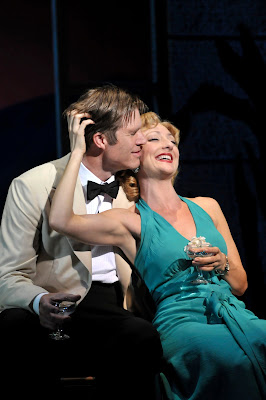 Rod Gilfry and Carmen Cusack.
Photo: Pete Coombs
A Breezy, Musical Evening
Rodgers & Hammerstein’s South Pacific breezes into the Bushnell through Sunday with a top-notch tour featuring the deep operatic baritone of Rod Gilfry playing Emil de Becque, who falls in love with nurse Nellie Forbush (Carmen Cusack) on an island in the South Pacific during World War II (the tale is based on the Pultizer Prize-winning novel by James Michener).
When their romance isn’t being tested by prejudice, ( Nellie can’t quite come to terms with Emil’s previous relationship with a native woman and the two “colored” children resulting from it), Emil is singing out beautiful tunes like “Some Enchanted Evening,” and “This Nearly was Mine.”
It’s a delightful revisit of the classic, and this tour is inspired by the much-aclaimed revival still running at Lincoln Center in New York (it closes this summer), directed by Bartlett Sher. It’s fresh, nicely packaged (sets are by Michael Yeargan, costumes are by Catherine Zuber and musical staging is by Christopher Gatelli) and fun.
Keala Settle lends humor as the enterprising Bloody Mary (even though she doesn’t look very native), Matthew Saldivar gives a nice turn as sailor Luther Billis and Anderson Davis lends his nice tenor to two of the show’s most loved tunes “Younger than Springtime” and “You’ve Got to Be Carefully Taught.” The male chorus in particular sounds great ("There is Nothing Like a Dame" is a treat) and the orchestra is filled out with local musicians.
Performances are Thursday and Sunday at 7:30 pm, Friday and Saturday at 8 pm, with a 2 pm matinee on Sunday. Tickets are $15 to $75 and are available by calling 860-987-5900 or by visiting http://bushnell.org/.
--Lauren Yarger
Posted by LaurenYarger at 5:11 AM