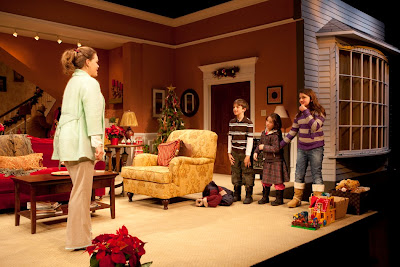 A Doll's House. Photo: T. Charles Erickson
Everyone and everything inside set designer Michael Yeargan’s house doesn’t quite belong in Gordon Edelstein’s modern adaptation of Henrik Ibsen’s A Doll’s House running through May 23 at Long Wharf Theatre.

Nora Helmer (Ana Reeder) forged a signature on a loan agreement with sleezy Nils Krogstad (Mark Nelson) who is blackmailing her to keep her husband from finding out. Her husband, Torvald (Adam Trese), doesn’t think his “little bluebird” should worry her head about anything, especially money and encourages her to focus on practicing a Tarantella dance for an upcoming costume party.

She seeks advice from and old schoolmate, Christine (Linda Powell), and considers turning to fatally ill Peter (Tim Hopper), Torvald’s wealthy old friend who secretly is in love with Nora, for help. All of that might seem plausible in the original Victorian setting, but it doesn’t fit in the modern house with people dressed in modern clothes (Jessica Ford, costume design). Nora’s dialogue is more modern, complete with some expletives, but the men continue to talk in stilted formal language.

Reeder, with a strong and boisterous presence, is completely miscast. She’s hardly the frail, frazzled dainty “bluebird” who needs help. She struggles all through the performance trying to nail any of her character’s emotions. To make matters worse, the awful Tarantella costume is too short and too tight and makes her look even more awkward. A Doll’s House has been produced continually since it was penned in 1879 and has consistently provided a meaty woman’ role for its star (Julie Harris and Jane Fonda are among those who have played Nora). If it’s not broken, maybe it doesn’t need to be fixed?