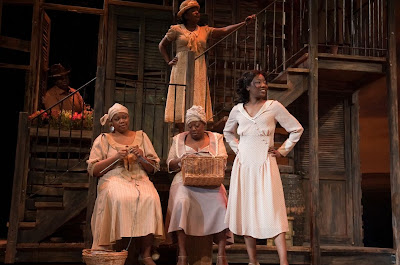 Photo:Sarah Shatz
Archive Review--
The 75th anniversary tour of George Gershwin’s Porgy and Bess plays The Bushnell through June 13. Approved by the Gershwin Estate, produced by veteran opera impresario Michael Capasso, General Manager of New York’s Dicapo Opera Theatre, and in association with producer Willette Murphy Klausner, (Three Mo’ Tenors). Porgy is directed by the Charles Randolph-Wright (Mama I Want To Sing). It’s an uneven production, with some good and some not-so-good elements. Among the highlights are Phillip Boykin as evil Crown, who demands Bess (Donita Volkwijn) leave crippled Porgy (Frederick Jackson) and come away with him. Also shining are Gwendolyn Brown as the straight-talking, humorous Maria, Heather Hill, in a noticeable, if brief, stint as the Strawberry woman, the versatile set designed by John Farrell which brings 1930s South Carolina to life and the fabulous George Gershwin score of course, with classics like “Summertime,” “I Got Plenty of Nuttin’,” Oh I Can’t Sit Down,” It Ain’t Necessarily So” and “Bess You’re My Woman Now.” Note: many of the roles are shared, so you might not see the same actor mentioned at another performance. Some of the low-lights: weak vocals, mediocre choreography by Keith Lamelle Thomas and almost two and a half hours of unintelligible singing, a real hinderance for anyone not already familiar with the story and lyrics written by DuBose and Dorothy Heyward and Ira Gershwin . A projection of the libretto above the proscenium as one might expect for an opera in another language is provided, but the words often aren’t exactly the same as those sung, are often behind the words actually being sung and sometimes don’t appear at all as though the transcriber isn’t sure what they’re singing either. It is a rare opportunity, however, to see the entire opera staged. Performances are Thursday and Sunday at 7:30 pm, Friday and Saturday at 8pm and Saturday and Sunday at 2 pm. Tickets are $15-$72. Visit http://www.bushnell.org.
Posted by LaurenYarger at 7:14 PM