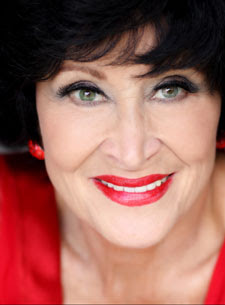 A Little Nostalgia, A Little Heaven;
It was Great, Grand and Swell
By Lauren Yarger
I did some time traveling last night and along the way, found myself stopping in heaven for a bit as Chita Rivera performed songs she helped make famous in numerous shows in Chita Rivera: My Broadway, the second installment of the summer Broadway Legends Series at Hartford Stage.

Chita has been a favorite since I saw her and Gwen Verdon in the original Chicago on Broadway in 1975 (I know, I know, I’m dating myself). It was one of those theater experiences you don’t forget. I’ve enjoyed the revival on Broadway, but it doesn't have the same magic as the original, and as for the movie with Catherine Zeta-Jones in the part of Thelma, I’ve never been able to wrap my mind around that combination enough to watch it, despite her Oscar.

So what a thrill it was to hear Rivera perform “Class,” “Nowadays: and “All That Jazz” from the show. I swear, I was transported back to 1975 and the thrill of seeing it for the first time. I could almost imagine Gwen up there too with a top hat and cane. A little bit of heaven right there in West Hartford.

Oh, and I almost forgot while basking in the glow of revisiting Chicago: she performs a lot of other songs and tells humorous stories too in the fast-paced, entertaining 85 minutes too. The show runs through Sunday with performances tonight at 7:30, Friday and Saturday at 8 pm and Sunday at 2 pm.

The series wraps with An Evening with Ben Vereen July 6-11, a unique blend of artistry combining a tribute to Broadway, Frank Sinatra, and a very special homage to Sammy Davis, Jr., An Evening With Ben Vereen is a contemporary and timeless journey through the Broadway songbook featuring such hit songs as “Defying Gravity,” “Being Alive,” “Something's Coming,” and “Life is Just a Bowl of Cherries.”

The first concert in the series was Elaine Stritch: Singin’ Sondheim One Song at a Time, For the review, click here.

The Broadway Legends series is presented at Kingswood Oxford in West Hartford while Hartford Stage undergoes renovation. Call the box office at 860-527-5151 or visit http://www.hartfordstage.org/ for more information.
Posted by LaurenYarger at 8:37 AM

Why would you say "I know, I know I'm dating myself" almost blushing with shame? You should be happy to say you were there for good theatre. This 'youth good-age bad' stuff is such a waste. We should be celebrating our years, the few and the many. Personally, I'd shout it from the rooftops if I could say I'd been there in 1959 to see The Merm in Gypsy.