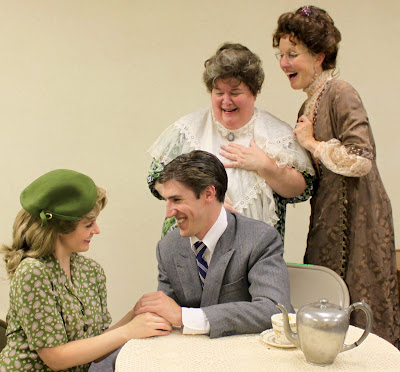 Pictured: Courtney Shaw, Dan Whelton, Sue Pynn, Alden Murphy
Julia Kiley directs a fun Ivoryton Playhouse adaptation of Joseph Kesselring’s 1939 classic comedy Arsenic & Old Lace, about the sweet old Brewster sisters, Martha (a delightful Susan Gayle Pynn) and Abby (Alden Rockwell Murphy) who poison lonely bachelors, then bury them in the basement of their Brooklyn home.
Their nephew, drama critic Mortimer (Dan Whelton who’s affable, but a little off on his timing), tries to hide their crimes from his fiancée, Elaine (Courtney Shaw who relies on a high, clipped voice striking poses to create her character), his serial-killer brother Jonathan (Robert Boardman, in character as a creepy Boris Karlof lookalike). Jonathan brings along his plastic surgeon and partner in crime Dr. Einstein (R. Bruce Connelly, who nicely brings to mind Peter Lorrey who starred in the 1944 movie with Cary Grant), and a dead body of his won to bury in the basement.
Adding to the craziness is Mortimer’s other brother, Teddy (Tom Libonate), who thinks he’s President Teddy Roosevelt. Libonate steals the show and is a hoot leading the charge up San Juan Hill or preparing to bury “yellow fever victims” in “locks” in the basement. Kevin Spedding and Jamison Daniels also give nice turns as two inept police officers unaware of any of the above.
The play, reportedly based on a real-life crime right here in Windsor, CT, runs through June 27. Performances are Wednesday and Sunday matinees at 2 pm; Wednesday and Thursday evenings at 7:30; Friday and Saturday evenings at 8. Tickets range from $15 to $38 and are available by calling 860-767-7318 or on-line at www.ivorytonplayhouse.org. The theater is located at 103 Main St, Ivoryton.
Posted by LaurenYarger at 6:57 PM