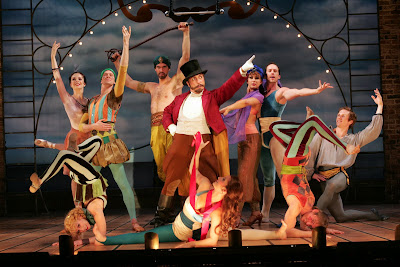 The cast of Carnival!. Photo: Diane Sobolewski
Circus and Love Perform Balancing Act
By Lauren Yarger
A young orphan runs away to join the circus. She meets a brooding, wounded veteran who can only express his emotions through the voice of his puppets. The orphan finds true friends in the puppets. They sing a lot of songs. The orphan and the vet get together.

That’s pretty much the gist of Carnival! which draws its inspiration from the 1950s film “Lili” starring Leslie Caron and the early television show ”Kukla Fran and Ollie.” The stage version playing at the Goodspeed Opera House offers a fairly unmemorable score (music and lyrics by Bob Merrill) but much more.

Monley is a dream to listen to (would love to hear him as Jean Valjean) and conveys well the anger and sorrow felt by his character, unable to continue his career as a dancer after being wounded (though the constant clutching of his leg to remind us of the injury is a little over the top).

The talented Lauren Worsham is adequate, but miscast by director Darko Tresnjak as the naïve, frail Lili. Worsham’s high belt and robust stage presence hardly telegraph naïve or “little mouse,” the nickname given to her by smarmy magician Marco (played well by Mike McGowan) who tries to take advantage of the young girl.

There isn’t any chemistry between Worsham and Monley, but that might be more the fault of a weak book by Michael Stewart (based on material by Helen Deutsch with revisions by Francine Pascal) which doesn’t really offer much reason for why the two end up together. Paul is, after all, rather angry and rude most of the time.

Nathan Klau gives a nice turn as Jacquot, Paul‘s friend/puppet show assistant (who might have ended up with Lili if the book had been better….) and Michelle Blakely tries to milk all the humor she can from her role as Rosalie, Marco’s lovesick, but unappreciated magician’s assistant. Laurent Giroux is fine as the owner of the “Grand Imperial Cirque de Paris.”

Fabio Toblin’s lovely period costumes lend to the feel of the era and to the circus atmosphere and Peggy Hickey adds some simple choreography. Robert Smythe designs the puppets and stages their antics which cause kids in the audience to giggle.

The show runs through Sept. 18. Tickets and other information are available at http://www.goodspeed.org/.
Posted by LaurenYarger at 8:39 AM