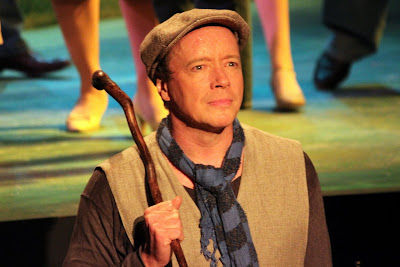 You won’t regret it. A Connecticut treasure, Connelly reaches deep down and becomes whatever character he’s playing (at Ivoryton alone he‘s played Einstein in Arsenic & Old Lace, Felix Unger in The Odd Couple, Pseudolus in A Funny Thing Happened on the Way to the Forum, Willie Clark in The Sunshine Boys, and Max Prince in Laughter on the 23rd Floor, but if you missed those, you can catch him on Sesame Street where he’s played Barkley the Muppet dog since 1993).

Whether he’s delivering his own lines, reacting to others or merely being the character while on stage, it’s always a treat to watch this master at his craft. His turn as Finian, an Irish father who steals a leprechaun’s pot of gold with the hope of turning it into a brilliant future for his daughter, Sharon (Kathleen Mulready), is another ray in his colorful career.

The musical by Burton Lane with lyrics by E.Y. Harburg (who co-wrote the book with Fred Saidy) isn’t quite as satisfying. Oh, there are a few nice tunes, the better known of which are “How are Things in Glocca Morra?,” “Look to the Rainbow” and “Old Devil Moon,” (musical direction here is by John S. DiNicola with two pianists playing the score) but the story leaves a lot to be desired, hence its short run on Broadway last season, despite the very nice take by director Warren Carlyle and the beautiful singing voice of Kate Baldwin (currently starring in I Do! I Do! over at the Westport Country Playhouse).

Sharon helps Woody Mahoney (John Rochette) pay the back taxes on his land and the two inevitably fall in love. Meanwhile, Woody’s mute sister, Susan (Tessa Grunwald), who can express herself only through dancing, falls in love with leprechaun Og (Michael Nathanson) who has followed Finian to America to retrieve his pot of gold.

The pot‘s magic can grant three wishes before Og turns mortal. No visual effects are used to show us how Og is growing in size, however, though the dialogue tells us he is, so that’s a little confusing, especially given Nathanson’s rather bulky size to begin with. He tries to find humor in the role, particularly in the song “Something Sort of Grandish,” but Kiley doesn’t reign him in and some of his advances toward Sharon and later, toward Susan, make him seem more a “lechechaun” than a leprechaun. 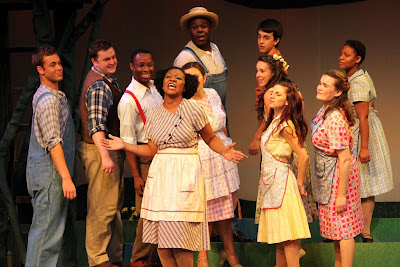 One of the wishes granted involves the town’s bigoted Senator Billboard Rawkins (Larry Lewis) turning into a black man, shocking everyone, including the sheriff (Jamison Daniels, who adds some needed humor by giving his character a pubescent squeaky voice.) The senator’s black face and hand makeup doesn’t work well, though.

Standing out along with Connelly is Patryce Williams as Dottie, pictured above center, who lends some humor and a nice voice to a fun rendition of the song “Necessity” with the ensemble.

The show runs through Sept. 5. Ticket and other information is available at http://ivorytonplayhouse.org/.
Posted by LaurenYarger at 8:27 AM