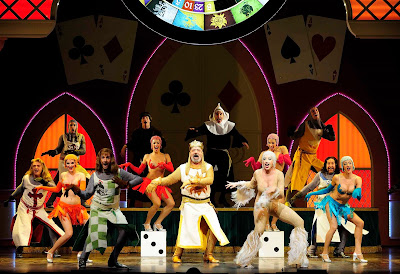 Spamalot photo from prior production
Monty Python Silliness Kicks Off National Tour After Retooling in Waterbury
By Lauren Yarger
If you’re not a Monty Python fan, stop reading now and just stay at home, because you won’t understand anything mentioned here, but if you are, grab your coconut shells and trot on over to the Palace Theater in Waterbury where the newest national tour of Spamalot is kicking off this weekend (catch the show tonight at 8 pm. Visit http://www.palacetheaterct.org/ for tickets and information).

The zany show, which won the 2005 Tony Award for Best Musical, features a book and lyrics by Monty Python’s Eric Idle, who teamed with John Du Prez to write the music. The show is restaged by director BT McNicholl and choreographer Scott Taylor closely following the original concept helmed by Mike Nichols and choreographed by Casey Nicholaw. It follows King Arthur (Steve McCoy) and his round-table mates on their quest for the holy grail.

Among those making their way with him through the perils of killer rabbits, catapulting cows, the Knights Who Say Ni and a lot of other tacky, but funny situations are the noblest -- and wackiest of sirs: Robin (Martin Glyer), Galahad (Jacob L. Smith) and Lancelot (Adam Grabau). Guided by The Lady of the Lake (Caroline Bowman) and God (the recorded voice of Idle), they sing, twirl parasols, and tap dance their way through songs and re-enact classic bits from “Monty Python and the Holy Grail,” the popular motion picture from which it was “ripped off.”

Fans in the audience Friday guffawed -- many times in advance of the actual lines since die-hard fans know what’s coming -- and at a local reference thrown in about the Waterbury mayor. A six-member band, conducted by Kevin Casey, accompanies the show, scaled back from the original and this time, non Equity.

The show is satisfying for the Spamalot fan. For the most part, the acting is fine and Smith lends a particularly nice voice to Galahad. Bowman, who has a nice high soprano voice and high belt, is miscast, however, as The Lady of Lake. She lacks the lower register and stage experience to pull off the character’s more humorous moments easily.

For list of where the tour will play, including a stop at the Shubert in New Haven, visit http://www.montypythonsspamalot.com/spamalot_tickets_info.php.
Posted by LaurenYarger at 1:14 PM