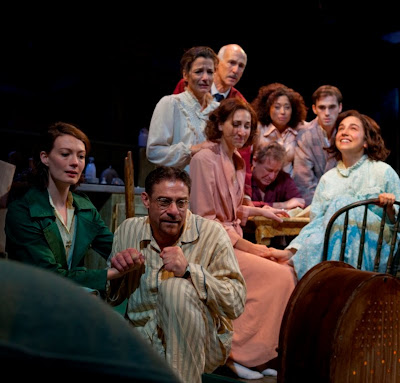 Front row, from left, Monica West (Miep Gies), Lou Liberatore (Mr. Dussel), Lauren Culpepper (Margot Frank), Steve Vinovich (Mr. Van Daan), Molly Ephraim (Anne Frank); back row, standing from left, Felicity Jones (Edith Frank), Mitch Greenberg (Otto Frank), Mimi Lieber (Mrs. Van Daan) and Ari Brand (Peter Van Daan) in “The Diary of Anne Frank” at Westport Country Playhouse, now playing through October 30. (203) 227-4177. www.westportplayhouse.org Photo by T. Charles Erickson
Be Prepared to Leave the Theater and Be Transported to a Small Attic During World War II
By Lauren Yarger
The Westport Country Playhouse production of The Diary of Anne Frank is one of those rare experiences where the fourth wall vanishes and audience members are swept into the drama unfolding on stage so effectively, that in this case, you’d swear you’re hiding in a small attic in Amsterdam where the fear that you might be discovered by the Nazis is palpable.

The experience is the result of excellence in many elements of the production. Wendy Kesselman’s newly revised adaptation of Francis Goodrich and Albert Hackett stage play about Anne’s two years of hiding with her family and other Jews during World War II focuses on emotions felt by the characters. It’s impossible not to feel what they feel.

Secondly, the small attic above her father’s former office is brought to vivid life by designer John Ezellthe. Multiple levels depict the living and common spaces shared by the Franks, the VanDaans and a dentist, Mr. Dussel, who joins the two families later. The walls, furniture and props all are drab. Bedding, linens and even the costumes (Wila Kim, designer) lend no color or life to the plight of those living in the attic and coiled barbed wire, high above in the rafters, is a constant reminder of the prisons that await outside the attic, which is accessed by stairs leading from below in front of the stage, completing the razing of the fourth wall.

Finally, but perhaps most effective in creating the experience, is the direction of Gerald Freedman. He coaxes winning performances from the actors and masterfully separates action taking place in one part of the attic from the day-to-day activities continued by others (the effect is aided by excellent lighting design by Travis McHale). The result is the creation of the audience as another entity in the drama taking place in the attic.

After a first act that is so engrossing, the characters stroll back onto stage as audience members return to their seats after intermission, cementing the feeling that we’re all in that attic together. We share the horror of a bombing raid, the chill of a radio address by Hitler, the sweeping joy of news that the Allies have invaded Normandy and the terror that every noise might bring the Nazis up the stairs.

Molly Ephraim’s Anne is a typical adolescent, annoying the Van Daans (Steve Vinovich, Mimi Lieber) with her constant chatter, high spirits and pranks -- all a contrast to her quieter sister, Margot (Lauren Culpepper), who is much more like their mother, Edith (Felicity Jones), against whom Anne rebels. She relates more to her father, Otto (Mitch Greenberg), and teases the Van Daans’ son, Peter (Ari Brand), with whom she shares a budding romance.

Providing supplies, news from the outside world and their only distraction from a life in hiding are Miep (Monica West) and Mr. Kraller (Allen McCullough), Otto’s former business partner. Rounding out the cast are Lou Liberatore as Dussel, Philip M. Gardner, Jack Kesy and Nicholas Wilder.

This production is a “don’t miss” of the season. It runs through Oct. 30 at the Playhouse, 25 Powers Court, Westport. For information and tickets, visit http://www.westportplayhouse.org/ or call 203-227-4177.
Posted by LaurenYarger at 1:21 PM