Theater Review: Everything the Traffic Will Allow -- MTC 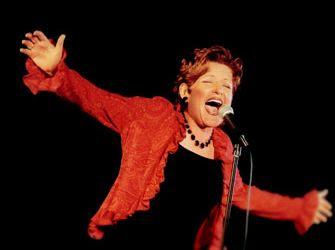 Klea Blackhurst sings Ethel Merman.
Subtitled 'The Songs and Sass of Ethel Merman,' This Show Has That and Even More
By Lauren Yarger
"Everything the Traffic will Allow: The Songs and Sass of Ethel Merman" offers all that and even more -- Klea Blackhurst narrating and singing her way through an hour and a half of the life and songs of her idol. Watching Blackhurst enjoy Merman is almost as fun as enjoying the songs and stories themselves.
Blackhurst, in a vintage style black cocktail dress evoking memories of the Broadway legend, crams facts, anecdotes and songs originated in a Broadway show by Merman (that was the criteria for inclusion in the program) accompanied by Bruce Barnes on the piano. She does justice to them all and proves that there really is no business like show business when it comes to being able to live out your dream on stage.
After finishing an exhausting rendition of "Blow, Gabriel Blow" from Cole Porter's Anything Goes, Blackhurst quipped that it's just a little number she likes to do on days when she can't make it to the gym.
The show is fun and provides a nice variety of Merman's most well-known belting numbers as well as some less recognizable ballads.
It runs through Oct. 24 at Music Theatre of Connecticut, 246 Post Road East, Westport. For tickets and performance times, visit http://www.musictheatreofct.com/klea.html or call 203-454-3883.
Posted by LaurenYarger at 1:46 PM