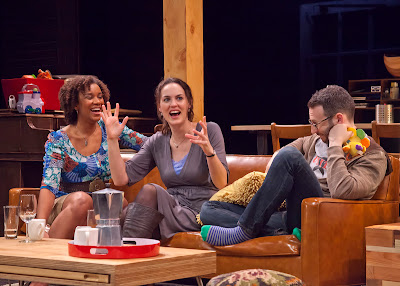 Tijuana T. Ricks, Beth Wittig and Andrew Rein. Photo: Lanny Nagler
Finding a Way Through, Around and Past THIS
By Lauren Yarger
A guessing game hits a little too close to home for a group of friends trying to come to terms with their lives in Melissa James Gibson’s delightfully dark comedy THIS playing at TheaterWorks.

Feeling a little down, still grieving for her husband who died almost a year ago, Jane (Beth Wittig) is sent out of the room while her well meaning friends hope to cheer her up with a fun new parlor game: They make up a story, which Jane has to try to guess by asking them only “yes” and “no” questions, only there is no story, really. The game actually is to make up the story based on the question Jane asks. The rules suddenly change, however, when the resulting story hits a little too close to the truth and Jane thinks the friends are micking her.
Filled with remorse, Tom (Clark Carmichael) goes to Jane’s home the next day to apologize, but a mutual attraction erupts and their act of adultery is a double betrayal, because Tom’s wife, Marrell (Tijuana T. Ricks), also is Jane’s best friend. Meanwhile, Marrell, growing increasingly aggravated with everything Tom does (even how he refills and pronounces the Brita pitcher in their fridge creates tension), tries to cope with postpartum depression and caring for the couple’s new son while sensing a feeling of growing distance with her husband.

Marrell finds some solace in working on her music (she’s a jazz singer at a club) and setting up Jane with good looking Jean Pierre (Maxime DeToledo), a doctor without borders. Jane’s not very interested, but Alan (Andrew Rein) their gay friend, a celebrity who remembers conversation verbatim, is. As the friends try to muddle through the complexities of life, their friendships are tested and Jane, in particular, is forced to face the loss of her husband, her best friend, and maybe even her young daughter if she doesn’t get her act together. For all of them, the time for playing games seems to be over.

Gibson writes an entertaining script filled with insight and humor and Director Amy Saltz coaxes out some moving and funny performances. Rein is responsible for a lot of the laughs with his very amusing portrayal of Alan as an engaging, sarcasm-slinging guy who you’d like to invite to your next dinner party.

Jean Pierre isn’t the only one without borders. Gibson’s plot verges on the convenient and bizarre a few times, but never crosses the line too far that it starts to feel alien. Luke Hegel-Cantarella designs the sets that slide around to portray various locations. Peter Eldridge composes the original music.

THIS continues at TheaterWorks, City Arts on Pearl, 233 Pearl St., Hartford, through Feb. 27. For ticket information, call 86-527-7838 or visit http://www.theaterworkshartford.org/.
Posted by LaurenYarger at 1:42 PM