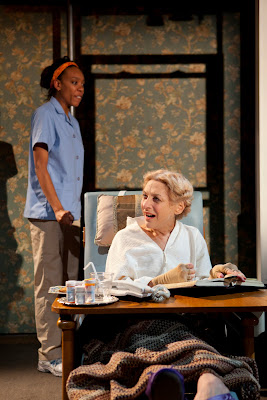 Summary:
The crossing of the lives of some immigrants making a go of their dreams in America. Storyteller Agnes (Francesca Choy-Kee) would rather be back home in Liberia taking care of her son Eugene, but instead she cares for wealthy, bedridden Ella (Laura Easterman), who contantly leaves messages on her son's answering machine begging him to take an interest in her life. Sharing the care duties with Agnes is Roza (Gergana Mellin), a mute Bulgarian woman who suffers constant verbal abuse from her husband, Shipkov (Michael Cullen), who used to be the ringmaster of the Bulgarian circus where he and Roza worked before coming to America. He trains Happy (Eshan Bay), an Indian rock star wannabee on his fourth job since coming to his new country, how to drive a subway train, the sounds of which are drummed by Busker (Sam Ghosh) and accompanied by neat lighting effects (Tyler Micoleau) on Frank Alberino's imaginative set to simulate on oncoming train.

Highlights:
• Choy-Kee is compelling as the mother trying to come up with a painless way to tell her son she'll never see him again. A terrific performance.
• Cullen is chilling as the abusive, yet engaging former ringmaster.
• Ting's direction is both tight and flowing to create a nice storyboard.
• The set is really cool.

Lowlights:
• The play has a very confusing beginning. It takes a while to figure out what's going on, who these people are, what they have to do with each other and why we should care.
• Once all that gets settled, the middle is interesting, but we never really find out everything we'd like to.

Posted by LaurenYarger at 4:46 PM