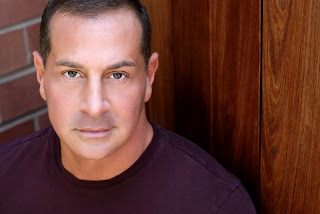 Playwright’s Real-Life Drama and Journey of Faith
By Lauren Yarger
When his play closes on Broadway this Easter Sunday, the irony of the timing won’t be lost on author Matthew Lombardo.

After all, High, starring Kathleen Turner as Sister Jamison Connelly, a nun with a faith crisis of her own trying to help a young boy kick his crystal meth habit, was inspired by the real seven-year addiction that almost robbed the playwright of his career, his faith and his life. A last-chance plea to God for help saved all three, so it seems ironic, yet fitting, that the play’s final curtain should come on the day when the resurrection’s triumph over death is celebrated. Without what Lombardo calls his own “miracle,” neither the play, nor he would be here today.

“I never thought I would get this again,” he said, gesturing around the Booth Theatre where we talked the week before the show was scheduled to open Tuesday, April 19. The playwright had seen success very early in his career, having plays produced and writing for the popular television soap opera “Another World.”.

His breakout work in theater came with the production of Tea at Five, his one-woman play about Katharine Hepburn, who made her home in Lombardo’s native Connecticut. The play premiered in 2002 at Hartford Stage starring Kate Mulgrew and enjoyed a successful regional tour. At the same time, however, Lombardo’s addiction to crystal methamphetamines was spiraling out of control.

The worst thing you can do with an addiction is take it on tour, Lombardo said. Suddenly no one wanted to work with him. He lost his career, his home and almost all hope that anything could change. It was a dark place in which he’d never expected to find himself.

No one had, in fact. His high school friends in Wethersfield, CT might have voted him “Least Likely Not to Have a Drug Problem” he kidded. The clean-cut, good looking man from a loving Italian Catholic family didn’t party much in his youth,

So what changed the course of his life? While in Los Angeles, he fell in love with a man who was a meth addict.

Ironically, after he was hooked, the other man entered a drug rehab program and as part of the treatment, was prohibited from having any contact with Lombardo.

Only two things had made him feel good, Lombardo said: the man he could no longer have and meth. He drew comfort from the one he still could have. He was tired of being “an all-American boy and doing the right thing,” he decided and began taking the drug every day.

Close with his mother, he would work hard to pull himself together for their daily phone chats. She didn’t know what was wrong, but she sensed something wasn’t right. At one point, in 2004, he thought about getting clean and confessed his addiction to his mother. She couldn’t believe it. It was just so unexpected.

He wasn’t able to quit and the habit got worse over the next three years. Finally, his sponsor told his family that they had to break all contact with Lombardo. His mother would play his voice messages over and over again to hear his voice, but couldn’t call him back.

That put Lombardo over the edge and caused a turning point. He calls it his miracle. He prayed to God and said “If you can get me into a cab and to the hospital, I will fight this.” The emotion from this moment in the playwright’s life shows up in a scene from High where Sister Jamison pleads with God to meet her half way.

He did get to the hospital where he slowly, but surely, started on the road to recovery. It wasn’t easy. Because meth “destroys your mind,” he was unable to tell between reality and fiction. While he was using, he never once connected that the drug was what had destroyed his career and was threatening his life.

As things became clearer, he recognized a pattern of addiction that had been present in his life from the time he was a small boy. Siblings also struggle with addictions, so he discovered he was battling a genetic disposition as well as other factors, he said.

Also coming into focus was a new relationship with God. The god he grew up with had been represented as distant and punishing, he said. During his seven years of drug addiction, he had turned his back on faith.

“The god I grew up with is different from the God I know today,” he said. Now, he’s personal.

Also helping on a personal level are the brothers in recovery he has met through his 12-Step Program, Crystal Meth Anonymous. He splits his time between New York and Ft. Lauderdale, where his sponsor is. These folks have helped him learn how to do everything all over again – sober. Even going to the store to buy a candy bar for the first time can be a daunting task, he said.

The 12-step program includes belief in a “higher power.” Lombardo smiles broadly when relating facts about medical professionals acknowledging that this belief seems to make it possible for someone to be healed.
“There’s nothing I can’t handle now because of my relationship with God,” he said. 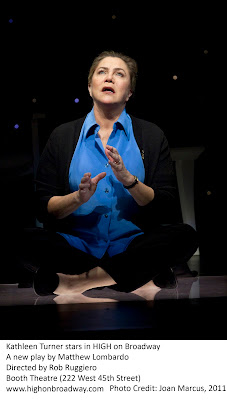 Proof of this came yesterday when producers posted an early-closing for High following less-than-favorable reviews and sluggish ticket sales.
"Despite the closing, I remain eternally grateful for this amazing opportunity,” he said. “Audiences have been extremely supportive of this project and I am so proud to have collaborated with this extraordinary groups of artists."
Not a day goes by that he doesn’t receive a message from someone who has been touched personally by High and the struggles of its character, young Cody, driven to prostitution and possibly murder while addicted. Recently, Lombardo related, a man in his early 20s languished at the back of the theater after one of the previews. When Lombardo identified himself as the author, the man thanked him for writing the play, and became emotional, saying that his brother was one of the “ones that didn’t make it.”

The play starts with the addiction, but becomes about faith and how to “get out of our way to let the miracle happen,” Lombardo said.

High plays its final performance 3 pm Sunday (April 24). What’s next for the playwright besides welcoming newcomers to his 12-steap meetings?

He’s working on an adaptation of six Greek plays, a vehicle for his specialty – a dynamite woman's role to be tackled by a powerhouse actress of a certain age, like Hepburn, Turner and Valerie Harper who garnered a 2010 Best Actress Tony nomination for Lombardo’s Looped.