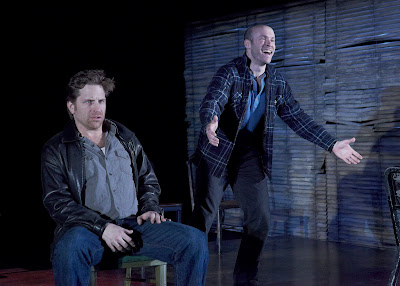 Kyle Fabel and Aaron Roman Weiner. Photo by Lanny Nagler
Steady Direction, Steady Performances
By Lauren Yarger
While watching Keith Huff’s A Steady Rain at TheaterWorks, I was reminded why I had enjoyed this play so much last season in New York, and it wasn’t because the Broadway production starred Hugh Jackman and Daniel Craig. It was because the play in thoroughly engrossing and keeps you on the edge of your seat – even when you’ve seen it already.

The gripping tale is the story of two men, childhood friends who have gone on to become Chicago cops together, and a storm of events that wash everything away almost in the blink of an eye. There was a steady rain when it all started, Joey (Kyle Fabel) remembers, and as the tale unfolds, we discover that tensions really had been swirling long before. A relentless pounding of both the friendship and the spiraling-down life of Denny (Aaron Roman Weiner) finally erodes both and sweeps them down the storm drain.

Racist Denny, convinced the department’s reversed affirmative action policies have denied him and his partner promotions to detective for the third time, earns extra money to provide for his family by shaking down prostitutes and pimps in the precinct. Joey, who is drinking himself to death, is saved when Denny and his wife make him feel like part of their family. When Denny sets Joey up on a blind date with a prostitute, however, the steady rain begins.

In the gripping and chilling aftermath of Denny’s built-up anger, a child’s life hangs in the balance, a serial murderer gains the upper hand, several people are killed, the bonds of marriage are tested, the partners’ friendship is strained and nothing will ever be the same. Huff’s writing draws you in, then stuns you with twists that reveal how a really bad day just got worse (there were some audible gasps from the audience) and challenges your definition of loyalty and protection.

The strong performances are tightly directed by Tazewell Thompson (who helmed Broke-ology and God of Carnage at TheaterWorks). The action all is through the dialogue: Donald Eastman’s set just uses a few chairs.

Catch it through May 8 at TheaterWorks at City Arts on Pearl, 233 Pearl St., Hartford. For tickets and information, call 860-527-7838 or visit http://www.theaterworkshartford.org/.
Posted by LaurenYarger at 11:39 AM