Theater Review: My One and Only -- Goodspeed 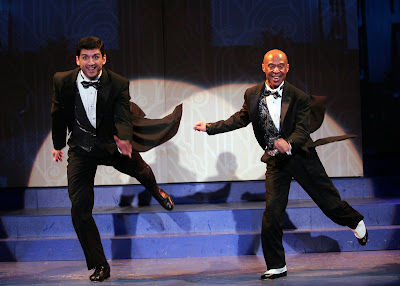 Tony Yazbeck and Alde Lewis, Jr. Photo by Diane Sobolewski
A ’S Wonderful Tap Dancing Extravaganza
By Lauren Yarger
If you’re wondering what caused that wake in the Connecticut River near East Haddam, it probably was the sound wave from the thunderous tapping feet at the Goodspeed Opera House bringing down the house in the extravaganza My One and Only starring Tony Yazbeck.

Yazbeck stars as Billy Bick Chandler, a flying circus pilot who hopes to be the first to fly solo to Paris, aided by his wisecracking mechanic Mickey (Kristen Wyatt, who shows an alacrity for physical humor and comedic timing). A romance with Edythe Herbert (Gabrielle Ruiz), star of Esther Williams-like movies following her swim of the English channel, is on the horizon, however, if they can outwit her manager and director, Prince Nicolai (Kris Lewin), who is blackmailing his film and love protégée with some compromising photographs.

Offering some advice -- amidst some tap dance challenges -- is Mr. Magix (Alde Lewis, Jr.). The duet’s “My One and Only” is a finger-snapping, toe tapping, hum-along delight. And if that isn’t enough, the Reverend J.D Montgomery (an engaging Trent Armand Kendall) lends a hand too, with a little help from his vocal backups, the New Rhythms (Vasthy E. Mompoint, Victor J. Wisehart and Richard Riaz Yoder). The book is by Peter Stone and Timothy S. Mayer.

Throw out a few out-of-date jokes about women and some scanty beauty pageant costumes and you’ve got one fun musical here. A scene where two castaways lie on the beach under a palm tree in front of a blue-ribboned scrim of an ocean while clouds float by is typical of the feel-good musical that Goodspeed does so well. And praise of this production would be incomplete without a special nod to sound designer Jay Hilton who effectively mixes vocals with individual taps. The dancing, though, puts this one over the top and confirms that being a theater critic is nice work if you can get it.