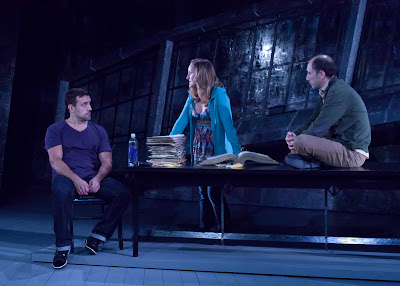 Matthew Montelongo, Jayne Paterson and Andrew Benator. Photo by Larry Nagler.
Waiting in the Wings Takes Center Stage
By Lauren Yarger
What should be a simple “put in” for a new understudy turns into a rehearsal from hell complete with romantic liaisons, life-changing movie deals, malfunctioning intercoms and a pot-smoking crew member that collectively make the bizarre Kafka play the characters are working on seem like a psychological breeze in comparison in Theresa Rebeck’s delightlful comedy The Understudy playing at Hartford’s TheaterWorks.

Harry (Andrew Benator), recently turned down for a movie role, insists in his asides to the audience that he isn’t bitter, even if the guy who got the action-hero part was paid more than $2 million to shout “difficult” lines like, “Get Down!” and “Get in the truck!” That guy, Jake (Matthew Montelongo), as luck would have it, is featured in the Kafka play and Harry is grateful, so he tells us, to understudy him. Even Jake is second banana here, though, as he  has to understudy the play’s real star, a $22-million-dollar-a-picture actor who is the darling of the producers, thrilled by his box office drawing power.

When Harry arrives to do an understudy rehearsal with Jake he is shocked to find that the play’s stage manager is highly organized, but very uptight Roxanne (Jayne Patterson), the woman he walked out on two weeks before their wedding six years ago. Things get awkward fast, especially when Jake and Roxanne discover some sexual chemistry while enacting a scene that Harry overhears on the intercom. Things go from bad to worse with the help of an uncooperative, stoned technical crew member (not seen) whose messing up of the scenery, light and sound cues rivals only the chaos taking place in the lives of Jake, Harry and Roxanne. (Luke Hegel-Cantarella designs the sets-within-a-set set.)

While some of the humor will be lost on those not working in the industry, Rebeck takes the play-rehearsal plot deeper and effectively focuses on the characters and their relationships. Before a brisk 100 minutes are up, the characters reveal vulnerabilities and insecurities proving that each knows exactly what it feels like to be second best, forced to stay in the wings waiting for a chance to step into the spotlight (literally depicted by lighting designer Scott Bolman). It is their ability to find humor and humanity that helps them cope.

Directed by Rob Ruggiero, the cast gives solid performances. Benator infuses humor into the dryly sarcastic Harry who continually offers suggestions for improvements to Kafka’s stage directions or to Jake’s interpretation of his character. Montelongo’s hammy Jake has us laughing over the “complexities” of pulling a gun out of his pocket and pointing it and it really is hard not to chuckle when Patterson gives a high-strung nervous giggle in frustration as she tries to stroke both men’s egos, deal with her own emotions and get through the disastrous rehearsal.

The Understudy runs through Sept. 18 at TheaterWorks, City Arts on Pearl, 233 Pearl St., Hartford Tuesdays, Wednesdays, Thursdays at 7:30 pm; Fridays and Saturdays at 8 and Saturdays and Sundays at 2:30. There will be a free performance for college students and faculty Saturday, Aug. 20.
Tickets are $40 on weekdays and for matinees; $50 Friday and Saturday evening. Center reserved seats are $12.50 extra. For tickets and information, call 860.527.7838 or visit http://theaterworkshartford.org.
Posted by LaurenYarger at 1:51 PM