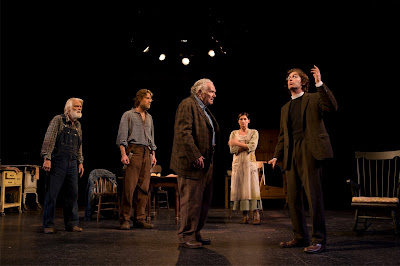 Summary:
Salem's Puritanical preacher Samuel Parris (Tom Beckett) discovers his daughter Betty (Lilli Jacobs), his niece Abigail (Rachel Mewbron) and some of their friends dancing wildly -- an even naked-- by moonlight in the woods while his slave Tituba (C. Zakiah Barksdale) conjures spirits of the dead. Betty has been acting oddly ever since, in a strange state of sleep when she isn't trying to fly. Parris summons an authority on the devil, Rev. Hale (David Barlow) to examine what might be behind the strange occurrences. Suddenly the townsfolk are throwing accusations of witchcraft at each other. John and Elizabeth Proctor (Michael Laurence and Kate Forbes) find themselves at the center of witch trials, thanks to the testimony of a vegeful Abigail, turned out of the Proctor's home after she seduces John. It's a study of paranoia, mob mentality and how quickly members of society can turn on others.

Highlights:
--Terrific performances with lots of depth from Laurence and Barlow.  Strong performances from the principals all around.
--A shocking and exciting dance-in-the-woods scene from set designer Eugene Lee. If you are wondering whether you need to see another version of The Crucible, this set treatment is the "yes" answer.
-Creepy, mood-enhancing original music and sound design by John Gromada (he really is tops in this field).

Lowlights:
--Costumes (Ilona Somogyi) and props that depict a more modern era, maybe the 1920s/'30s instead of the period of the Salem witch trials.
--Edelstein's misplaced anti-George W. Bush statement with the words "Either you are with us or you are with the terrorists" emblazoned on the wall over the trial. The play, after all, was a reflection of  anti-Communist paranoia, and McCarthyism in the 1953 culture when the very good play was written. A statement by a president going to war 10 years ago after the worst attack on American soil isn't quite a fitting match, whether you're a supporter of the war decision or not. If the idea was to force the link between the witch trial and modern culture, a more accurate statement might have been "If you aren't for Obama you are a racist, or teabagger, or SOB," -- or fill in the blank with any number of hate-filled statements against the right as recently reported in the media. The best approach probably would have been to let the play speak for itself and allow an intelligent audience to draw its own comparisons.

More information:
The Crucible has been extended through Oct. 6. Tickets can be purchased by calling 860-527-5151 or by visiting hartfordstage.org.
Posted by LaurenYarger at 9:18 AM

I am now playing the world's smallest violin for you.