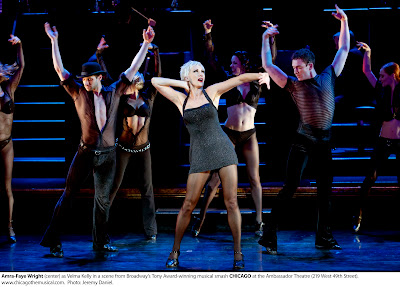 What's it about?
A bunch of murderesses in late 1920s Chicago populate the cellblocks waiting for their trials. Mama (Kecia Lewis-Evans), the matron, takes good care of her girls and for the right price, puts in a call to lawyer Billy Flyn (John O'Hurley) to come up with a sensational defense that will interest the press and tabloid reporters like Mary Sunshine (D. Micciche). The current star of murder row is Velma Kelly (a terrific Amra-Faye Wright who played the role on Broadway), but she is usurped by new sensation Roxy Hart (Christie Brinkley), who is still supported by mousy husband, Amos (Ron Orbach), even though she is accused of murdering her lover.

What are the highights?
Well, first there is the fabulous score and really clever lyrics. It's a Kander and Ebb triumph, one-upped only by their more recent Scottsboro Boys. Several performers here are high caliber. Wright sounds like she was born to sing this role (and at times, she sounds a lot like Chita Rivera, the original Velma, too. It's a treat.) Lewis-Evans has a great vocal instrument (and she makes us chuckle with some fresh interpretations on Mama's songs.) O'Hurley is fun as the suave, yet sleasy attorney and lends a nice vocal voice to his tunes as well. Orbach (a cousin of Jerry Orbach, who was the original Billy Flynn) definitely gets noticed for his fine, sensative portrayal of the almost invisible, unappreciated Amos.

What are the lowlights?
Christie Brinkley, who played this role twice on Broadway, gives it a professional effort (adopting a speaking voice that sounds a lot like original Roxie Gwen Verdon), and she looks terrific, but singing and dancing don't come naturally to the former supermodel. Solos can be tedious. Micciche is too tall for the part and is costumed in an outfit that's a little too on the masculine side. There's also some kind of distracting reverb in the sound mix on some numbers.

More information:
This quick-stop tour plays at the Bushnell, 166 Capitol Ave., Hartford, through Sunday, Oct. 28. For tickets and performance information call 860-987-5900 or visit www.bushnell.org.
Posted by LaurenYarger at 7:31 PM