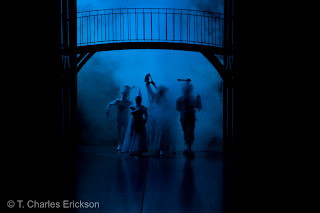 In Hartford Stage's A Christmas Carol, The Emphasis is on the Ghosts
By Lauren Yarger
Right from the start, Michael Wilson’s adaptation of Charles Dicken’s A Christmas Carol makes it clear that its subtitle, “A Ghost of a Christmas Story,” should be taken seriously. Not only do the four ghosts we expect pay visits, but others dance, fly, float and slither across the stage in a satisfying presentation now in its 15th season at Hartford Stage.

Bill Raymond, who currently can be seen in movie theaters as the Speaker of the house in Steven Spielberg's “Lincoln,” returns for his 13th season as Ebenezer Scrooge (Gustave Johnson plays the role for student matinee performances.) His Scrooge is a little more upbeat and likable than most and Wilson adds touches of humor that keep the tale of the cold-hearted miser who long ago forgot the spirit of Christmas from being too somber.

Director Maxwell Williams helms the tale of how the spirits of Christmas Past, Present and Future help Scrooge change his heart.

Scrooge, in his usual foul mood, grumbles about having to give his clerk a day off, scoffs at making donations to charities to help the poor and demand payment of debts from the marketplace vendors who owe him money.

But Scrooge is in for a Christmas Eve he’ll never forget. When he arrives home that night, dead business partner Jacob Marley (Noble Shropshire) rises up through the floorboards of his bed chamber, fettered and moaning in torment. He begs Scrooge to change his ways and to avoid making the same mistake he did by putting a love of wealth before love of his fellow man. He warns of more ghostly visits to come.

The Spirit of Christmas Past (Johanna Morrison) arrives on a beautiful sleigh with fresh fallen snow and transports Scrooge back in time. He remembers the love of his little sister, Fan (Abi Connor and Abigail McMillan), the joy of working for generous boss, Mr. Fezziwig (Alan Rust) and his engagement to beautiful Belle (Gillian Williams), whom he once loved more than money.

Lessons are learned from the present as well, as a Santa type spirit (Rust) arrives amidst the glitter of the season and shows Scrooge how his poor clerk, Bob Cratchit (Robert Hannon Davis), keeps good cheer despite laboring away for almost no wages while his son, Tiny Tim (Ethan Pancoast and Fred Thornley IV), a cripple, amazingly leads his family in a toast to the old miser’s health. Nearby, Scrooge’s nephew, Fred (Curtis Billings) and his family and friends enjoy festive holiday games while pitying Scrooge, who every year declines their invitation to join the fun.

The Future looks grim. Scrooge’s housekeeper, Mrs. Dilbert (Stropshire, playing the female role for no apparent reason), sells the penny pincher’s bedclothes for a profit before the undertaker comes to collect Scrooge’s corpse and no one seems to care enough about him to come to a funeral. Even worse, if the shadows of things to come aren’t changed, Tiny Tim could die.

Don’t worry. There’s a happy ending and this production is a fun holiday tradition for many families in the Hartford area.

-- Local vendors will showcase unique gift items in the lobby before the show, during intermission and after the show on Dec. 9. Free to the public. Doors open at 12:30 p.m.

-- Behind the Magic: The Hartford Stage production staff hosts a behind-the-scenes look at the special effects that make ghosts soar and snow fall. This takes place Dec. 16 at 4 pm. Cost $5 per person.

-- Family Fun Night: The ghosts will greet and entertain. After the show, get autographs from all your favorite characters. Free with show ticket. Dec. 20 at 6:45 pm.