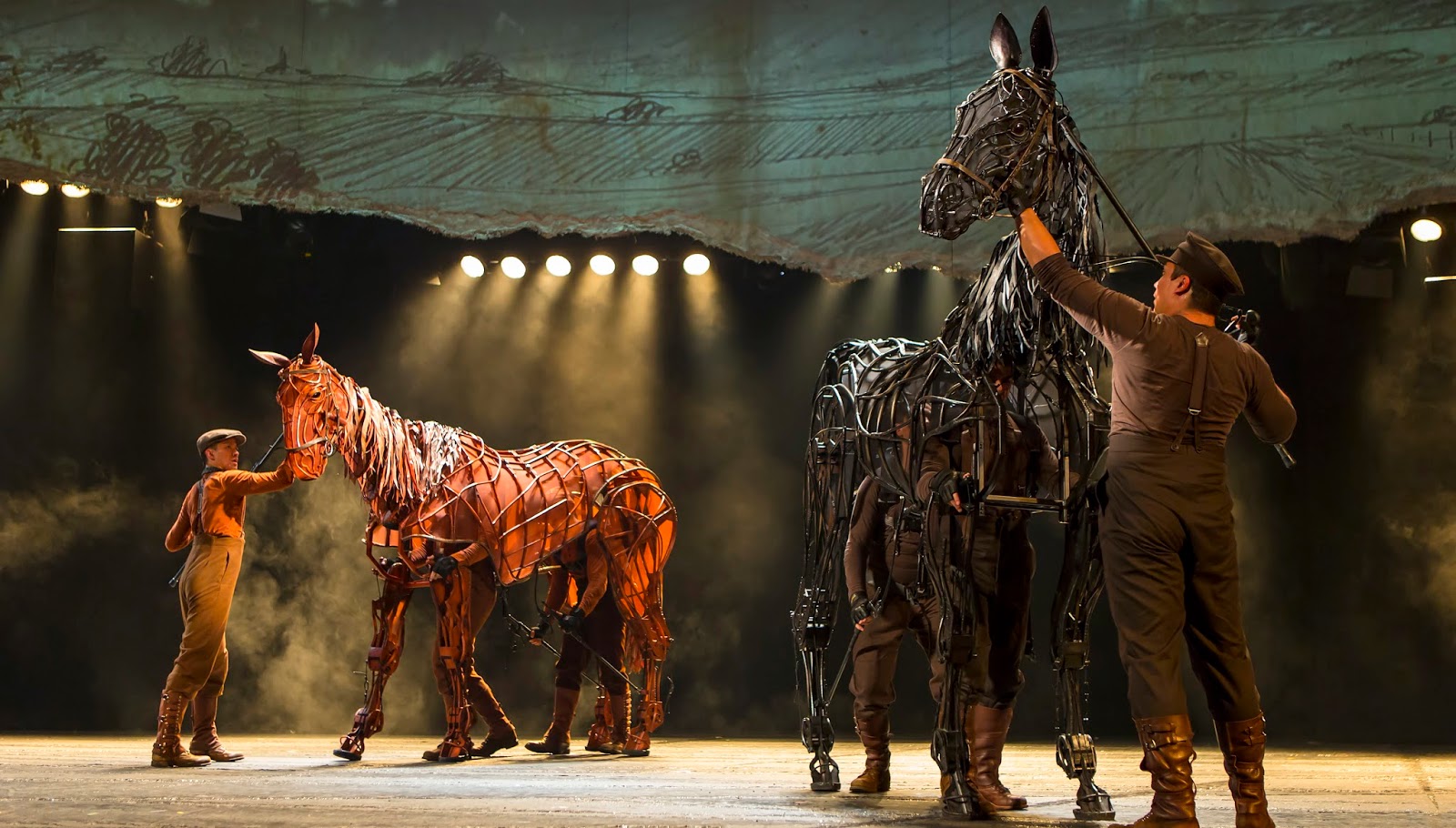 A Tale of a Boy and His Horse That Gallops Away with Imagination
By Lauren Yarger
A sweeping tale of friendship and devotion amidst the horrors of war combines with spectacular puppetry to bring Michael Morpurgo’s children’s novel War Horse, to life on stage. It reins in for a tour stop at The Bushnell through Sunday.

The moving story of a boy and his horse is told in epic proportion as the audience is transported from 1912 rural Devon, England to the battlefields of World War I France thanks to animated sketches and images rolling on a torn piece of sketchbook above the action (Rae Smith designs the sets, costumes and drawings) and a number of puppets ranging from birds to farm animals to breath-taking full-sized horses designed by Adrian Kohler with Basil Jones for Handspring Puppet Company. The show won multiple Tony, Drama Desk and Outer Critics Circle Awards in 2011, including Best Play.

The War Horse is “Joey,” a Hunter (part draft, part Thoroughbred), who is in the middle of a "war" from its earliest days as a foal (Mairi Babb, Catherine Gowl, Nick Lamdica manipulate the puppet). He is purchased by Ted Narracott (Gene Gillette) who uses his mortgage money to outbid his hated brother, Arthur (Andrew Long), who still enjoys taunting him, along with the rest of their village, for being a coward and refusing to serve in the last war.

Ted brings the little foal home to the dismay of his wife, Rose (Maria Elena Ramirez), who worries about losing their farm. Their son, Albert (Michael Wyatt Cox, who looks much older than 16), is charged with the animal’s care and turning him into an adult horse that the family might be able to sell for a price to recoup some of the exorbitant amount paid for him.

Albert and Joey find soul mates in each other, however, and when the time comes to sell the beautiful, free-spirited horse, the boy can’t bear the thought of being parted from him. They “speak” to each other and Albert calls Joey with a special whistle.

Nasty Arthur, however, sees another chance to do his brother harm. He bets him that Joey can’t be taught to plow a field in one week, putting up the horse’s original auction price as the stakes. If Joey can’t plow, Arthur will win the horse for his own son, Billy (Tim McKiernan). Over his family’s objections, Ted accepts the bet.

Albert agrees to try to train the horse with one condition: if Joey plows, the horse will be his and they won’t have to sell him. Ted gives his word and Rose, ever-supportive of her son takes on the boy’s farm chores so he can work nonstop on the seemingly impossible mission. The terms of the agreement become moot, however, when England enters World War I and Ted sells Joey behind Albert’s back to the Army.

Lt. James Nicholls (Brendan Murray) loves the horse too (he has been sketching the local boy riding his horse for years) and assures Albert he will care for him as they go off to the front to fight the Kaiser. There they find that the Calvary is almost obsolete in the face of new inventions like the machine gun and barbed wire. When Nicholls is killed in action, his sketchbook is returned to Albert who joins the army to try to find Joey.

Meanwhile, Joey (puppeteers for the adult horse are Danny Yoerges, Patrick Osteen, Dana Tietzen ) finds himself pulling an ambulance cart for the German Army when Capt. Friedrich Muller (Andrew May) schemes to keep himself and his horse, Topthorn (handled by Jon Hoche, Brian Robert Burns, Gregory Manley), out of harm’s way. They also save a girl (Ka-Ling Cheung) and help Billy, who get a glimpse of what a real coward looks like in the face of the battle raging around him. Joey also is the cause for a temporary ceasefire as British and German soldiers come together to aid him.

One element that disappoints here, is the lighting, adapted by Karen Spahn from Paule Constable’s original design. Because lighting from the back of the house keeps it from being pitch dark, many of the effects are visible and the “magic” of the original production, like the transformation form foal to full horse or five horses galloping across the battlefield, are lost in the tour. (Some of the script and puppetry from the New York version also has been trimmed to shorten the original run time).

The intimacy required to feel part of the story, rather than an observer of it, unfortunately isn't attained. This might have been better captured if the show had been performed in the smaller Belding Theater, rather than in the cavernous (and, on the night I attended, no-where-near-full) Mortensen Hall.

Don’t let those complaints deter you from seeing this mastery of stagecraft, however. The horses are so lifelike (with two persons inside the body and one handling the head who contribute sounds as well), you’ll soon forget they are just puppets. At a press event, Joey met real horses from the Hartford Mounted Police who nuzzled up to him like he was an old friend.

For more information on the show visit http://warhorseonstage.com/.

Some fun facts:
·   Joey weighs 120lbs and is handmade by 14 people. Its frame is mostly cane, soaked, bent and stained.
·   An aluminum frame along the spine, lined partly with leather for comfort, allows the horse to be ridden.
·   Stretched, hosiery-like Georgette fabric makes up the “skin” beneath the frame.
·   A puppeteer at the head controls the ears and head; one in the heart controls breathing and front legs; a third in the hind controls the tail and back legs.
·   A harness connects the puppet’s and puppeteer’s spines so his or her movements become the breathing of the horse.
·   The tail and ears are moveable instead of the lips or eyelids, because that’s how horses usually express themselves.
·   Two levers connected with bicycle brake cables control the leather ears.
·   The puppet, just under 10ft long and about 8ft tall, has about 20 major joints. Vertical levers curl the knees and lift the hooves.
·   The neck is made of carbon fiber glass for flexibility.
·   The eyes are black color behind clear resin so light refracts through them.
·   The right hind lever moves the tail up and down; the left hind lever, left to right; moved together, it spirals.
·   The hair in the mane and tail is made of Tyvek, a plastic-like paper.
Posted by LaurenYarger at 6:02 AM