What's It All About?
The 2016 Lucille Lortel Award-winning play by George Brandt (Marie and Rosetta),about a US Air Force fighter pilot who is grounded after becoming pregnant (the play also received a Fringe First Award at the Edinburgh Fringe Festival, and was short-listed for the Amnesty International Freedom of Expression Award.)

Elizabeth Stahlmann, a recent graduate of the Yale School of Drama, delivers a powerful performance as the pilot coping with the emotional difficulty of a woman balancing career and family, as well as being a human trying to justify killing people for a living.

The pilot, who defines herself by her occupation, is tough as nails and when she's not flying her F-16 Tiger jet to take out enemies in the desert, she's enjoying a round of celebratory drinks with the boys and dreaming of her next opportunity to be up in the "big blue."  When she meets Eric, passion turns into a flight suit that no longer fits and reassignment to flying drones. The play explores the character's emotions as the pilot tries to adjust to family commitment while being unable to detach herself from her desire to be in the sky or the stresses of carrying out attacks against enemies who drive SUVs like hers and have children who look like her daughter.

What Are the Highlights?
Stahimann give a gripping, stand-out performances showing layers (sometimes not so pretty) of a person in turmoil. Tight direction by Liz Diamond propels the storytelling, transforming a space with a single chair from a car to a cockpit to the bedroom of a sleeping daughter.

What Are the Lowlights?
While Brandt's play attempts to preach the message that we are all the same in the end, it's really hard to relate to this character and brings home the thought that she probably isn't someone to whom most of the audience will be able to relate. She's a soldier who apparently loathes feminine women, vowing that her daughter will not grow up to be a "hair tosser" or cheerleader. The fact that her little girl wants to play with ponies instead of military planes aggravates her. The most sympathetic character is the husband -- sympathetic and understanding of his wife's long hours and work-related stress, a marvelous dad, turned on by a successful, strong woman -- if he were real, he would be the number one-catch for husband in America. I couldn't help but wonder what the story, told by a female playwright, might have been like.

More Information:Grounded has been commissioned by the Metropolitan Opera to be adapted into an opera with music by Tony Award winner Jeanine Tesori, and is being developed into a feature film starring Anne Hathaway. who played the pilot in the Off-Broadway production of the play in 2015.
Additional credits: Riccardo Hernandez, scenic design (he designed the Off-Broadway production of the play); Jennifer Moeller, costume design; Solomon Weisbard, lighting design; Kate Marvin, sound design.
Performances are at Westport Country Playhouse, 25 Powers Court, Westport through July 29 Tuesday at 7 pm; Wednesday at 2 and 8 pm; Thursday and Friday at 8 pm Saturday at 3 and 8pm. westportplayhouse.org; (203) 227-4177

Posted by LaurenYarger at 7:24 AM No comments: 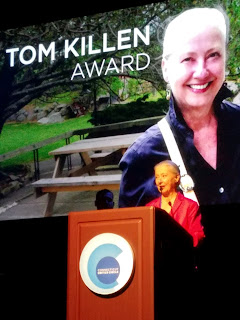 You can find the complete list of this year's winners by following this link:
http://www.broadwayworld.com/connecticut/article/Connecticut-Critics-Circle-Award-Winners-Announced-20170708
Posted by LaurenYarger at 7:37 AM No comments:

The Complete Works of Shakespeare (Abridged)
By Adam Long, Daniel Singer and Jess Winfield
Directed by Tom Ridgely
Playhouse on Park
Through July 30

By Lauren Yarger
What's It All About?
Well, like the title says, it's the complete works of William Shakespeare abridged.  All 37 of the Bard's plays are incorporated in this 100-minute comedic presentation with all of the characters being played by three actors, Playhouse on Park Co-Artistic Director Sean Harris, Rich Hollman and Hannah Cheek.

Presented as a theatrical offering by a hapless troupe, the show focuses on their bumbling attempts to re-enact well know scenes from Romeo and Juliet, Hamlet  and Julius Caesar then takes farcical license with others, interpreting Titus Andronicus as a cooking show, for example. Other's make their appearance in name only or with a single reference.

What Are the Highights?
The actors seem to be having fun, and Hollman looks silly in Elizabethan dresses and mop wigs.  A scene depicting the battle for the throne among Shakespeare's kings is well staged as a mock football game where the crown gets passed among the players.

The play was first published 20 years ago, but has been updated by Singer and Winfield to include modern references, which were a welcome addition to a play which seemed pretty out of date the last time I saw it.

What Are the Lowlights?
It's a play that wants to be a fast-paced, witty farce, but isn't. There are moments, but the parody never really finds its footing. This is not a reflection on the actors -- the material isn't sharp enough. And the pace drags a bit, almost as though the authors are basking in their own cleverness. It is a light, fun show, but doesn't reach its potential.

More Information:
The Complete Works of William Shakespeare (Abridged) plays at Playhouse on  Park, 244 Park Road, West Hartford, through July 30. Performances are Wednesday and Thursday at 7:30 pm; Friday and Saturday at 8 pm.   A special Tuesday matinee will be held on July 18 at 2 pm, with specially priced tickets: playhouseonpark.org; 860-523-5900 x10.


Posted by LaurenYarger at 10:03 AM No comments: