By Lauren Yarger
A washed-up Elvis impersonator finds himself as a drag queen performer in this play with music from The Whipping Man playwright Matthew Lopez getting a run at TheaterWorks.

Casey(Austin Thomas) and his wife, Jo (Samaria Nixon-Fleming) are trying to get by on her waitress tips and what he earns as an Elvis impersonator at Cleo's, a dive nightclub run by Eddie (J. Tucker Smith) in the Florida Panhandle. Just when they find out they are expecting, Casey finds out that Eddie is replacing him with a drag-queen act headlined by Miss Tracey Mills (Jamison Stern) and Rexy -- short for Anorexia Nervosa -- (Nik Alexander, who also doubles as the couple's landlord, Jason, who is about to evict them for not paying the rent).

Casey is given the option of bar tending to earn a few bucks, but when Rexy gets drunk and can't go on, Tracey gives Casey a quick how-to in drag queen lip syncing and a star is born. Well, it actually takes some practice and Director Rob Ruggiero expertly captures humor and growth during this sequence, and suddenly Rexy is out and Tracey and her new creation -- Georgia McBride -- are packing them in at Cleo's. There is one problem, though, Casey hasn't told Jo how he's really making a living. Is it because he is embarrassed, or because he is enjoying his new persona too much?

Part of the evening's entertainment (runt time is one hour and 45 minutes without intermission) includes a lengthy drag queen show brought to life by Choreography by Ralph Perkins and Paul Tate dePoo III's set design (it moves quickly from backstage at the club to Casey and Jo's apartment to center stage) lighted by the always excellent John Lasiter. Special kudos go to Costume Designer Leon Dobkowski and Wig Designer Mark Adam Rampmeyer, who create many looks for the guys dressing as gals.

Georgia McBride works on becoming a legend at TheaterWorks,  233 Pearl St., Hartford. The theater warns this show is for ages 14 and up. Performances are Tuesday, Wednesday, Thursday at 7:30 pm, Friday and Saturday at 8 pm and Sunday at 2:30 pm. Tickets are $45-$70: theaterworkshartford.org.

Posted by LaurenYarger at 12:40 PM No comments:


You are invited to an open house to see an art deco theater now available for rental in New York.

The Centennial Memorial Temple on 14th Street is a step back into the past. Built in 1929 at the Salvation Army's headquarters at 120 W. 14th St. between Sixth and Seventh avenues to honor the 100th anniversary of its founder, William Booth, this state-of-the-art performance hall was designated a New York City landmark in 2017.

The theater is available for all kinds of events including  film shoots, concerts, corporate meetings, movie screenings, fundraisers, graduations and town hall meetings. The theater seats 1,347 while Railton Hall, located under the auditorium, can host up to 100 guests and Mumford Hall, right below Railton, is available for groups of up to 220 for an intimate luncheon, corporate meeting or staff training.

CMT’s technical staff members have won Grammy Awards, worked on the Oscars, served on crews for top recording artists like Sting and the Foo Fighters, toured with Broadway shows and staffed production crews at major TV studios. All proceeds from the rental of our spaces are used to support The Salvation Army’s more than 100 programs and services in the Greater New York area, which serve more than a million at-risk adults, children, and families each year.

If you are unable to attend the open house April 10 from 10 am to noon, you may arrange a private tour. To RSVP for the open house, to arrange a tour or for more information, call 212-337-7339 or visit salvationarmyny.org/openhouse.

All proceeds from the rental of our spaces are used to support The Salvation Army’s more than 100 programs and services in the Greater New York area, which serve more than a million at-risk adults, children, and families each year.
Posted by LaurenYarger at 10:56 AM No comments:

What's It All About?
It's Ken Ludwig's comic twist on the Sherlock Holmes (Alex Moggridge) mystery "The Hound of the Baskervilles."  Holmes and his trusty assistant, Dr. Watson (Daniel Pearce) offer their assistance to unravel a mystery around a fatal heart attack might actually be murder and a hideous, huge hound who may be the culprit. Think "The 39 Steps," with it's silly humor and gags, only not quite as engaging.

What Are the Lowlights?
It's a fun time at the theater, but the most annoying thing for me was that the actor playing Watson resembled what I expect Watson to look like and vice versa. I had to stop and re-gear my thoughts several times because I kept getting them confused.

And before you ask (and many of you do quite regularly), no I have not reviewed these folks. I was invited to review the show Off-Broadway at the Public Theater with the original cast, but have not had the pleasure of seeing it on Broadway. Read that review, which put the show in our Top Picks category, here.  There still is a very long wait for tickets. Try the lottery here.

The Connecticut Office of the Arts has launched its 2018 Arts Workforce Initiative designed to provide internship opportunities for Connecticut college students, emerging professionals and military veterans at Connecticut not-for-profit arts and cultural organizations.

A total of 28 individuals will be placed with selected host organizations for a 10-week, paid internship June 4-Aug. 17, 2018.

To be eligible for an AWI Internship, individuals must:
Be a Connecticut resident
Demonstrate a financial need
Align with the Office of the Arts' READI Framework
Have availability to successfully complete the program
Specialize in or wish to grow professionally in the following categories: arts administration, arts presenting/curating, media arts, performing arts, visual arts, arts education, and literary arts
Be enrolled in an accredited college or university or be an emerging arts professional (for the "40 and Under" Category)
Be a veteran of the US Armed Forces (for the "Veterans in the Arts" Category)
Apply here. Applications must be received no later than midnight Sunday, April 8, 2018.

To be eligible as an AWI Host Organization, an organization must:
Apply here to be a host organization. Applications must be received no later than midnight Sunday, April 8, 2018.

For more information:
Questions:
Contact Adriane Jefferson at 860-500-2328 or via email.

Due to the enormous success of the AWI pilot program in FY17, COA has committed to expanding the Arts Workforce Initiative in 2018. The number of interns has more than doubled from 12 to 28 and the application process is now open to all Connecticut not-for-profit arts and cultural organizations that can provide a hands-on and engaging internship opportunity in the arts.

The Workforce Initiative is funded by the Connecticut Office of the Arts and the National Endowment for the Arts.

Posted by LaurenYarger at 9:53 AM No comments:


Murder on the Orient Express
Adapted by Ken Ludwig, based on the novel by Agatha Christie
Directed by Emily Mann
Hartford Stage
Extended through March 25

By Lauren Yarger
What's It All About?
The McCarter Theatre's production of the who-done-it. David Pittu stars as Agatha Christie's Belgian detective Hercule Poirot, who tries to solve the murder of a mysterious Mr. Ratchett  (Ian Bedford) aboard the Orient Express. There's no shortage of suspects. Who could it be?


And what is the connection between the murder and the kidnapping/murder of little Daisy Armstrong (Jordyn Elizabeth Schmidt of Glastonbury) some years before?

What Are the Highlights?
Halston, with her comedic charms in high gear, finds ways to keep us laughing throughout as usual. She's a theater gem.
Beowulf Boritt's deco train set is the other star of the show. It sparkles and moves and provides visual stimulation for the various compartments on the train.

What Are the Lowlights?
This Christie story is slow moving and I realized somewhere in the middle of attending the show that I never had made it through the book (first published in 1934) or the film versions based on it. I had grown bored and given up each time. Ludwig adds some humor, but my interest still waned during the two hours with intermission (it felt longer, but not sure what Director Emily Mann could have done about it). The upside was that I finally found out who done it. And I didn't correctly guess ahead of time like I usually do in murder mysteries, so that says something for the plot after all. 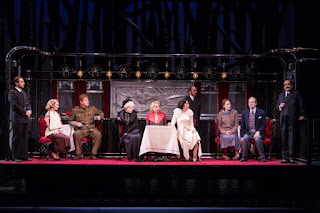 Posted by LaurenYarger at 8:13 AM No comments: