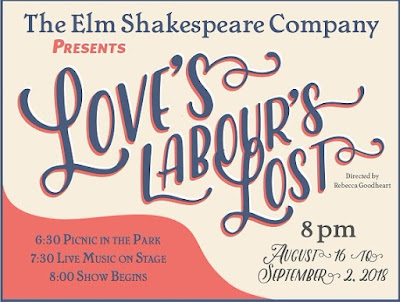 Click Here for details!
Posted by LaurenYarger at 11:58 AM No comments:

The Age of Innocence

By Lauren Yarger
What's It All About?
Boyd Gaines and Sierra Bogess head an excellent production of Edith Wharton's The Age of Innocence, adapted for the stage by Douglas McGrath (this is a co-production with the McCarter Theatre Center).  It's a disturbing love story set in the Victorian era, where the rules of upper-class society can be as stifling as the corsets worn by the women (lovely period costumes are designed by Linda Cho).

Gaines is an older version of himself -- Newland Archer (Andrew Veenstra), a young attorney who marries innocent May Welland (Helen Cespedes) despite his growing attraction and feelings for the exciting Countess Ellen Olenska (Boggess), who has returned to New York following a scandal with her husband, whom she has left in Europe. Society won't tolerate another scandal, but the dream about how they might be together. The story won the Pulitzer Prize for fiction in 1921 and remains relevant in 2018 because it is more about human nature and relationships than it is about the time period. People don't live in a bubble, Newland says. Actions affect others. How do you choose between love and honor? That applies today very well.

What Are the Highlights?
A sumptuous production, meticulously directed by Doug Hughes -- even better than the 1993 film that starred Daniel Day-Lewis, Michelle Pfeiffer and Winona Ryder. A simple turn by a character can change the scene from the street to an apartment setting (as beautifully designed by John Lee Beatty, who manages to create a simple design that invokes the elegant and extravagant look of the time period. A pianist (Yan Li) blends into the scenery to provide accompaniment for an impromptu duet.

Cespedes mesmerizes as a dichotomy of May which is at once an innocent and naive, helpless female while at the same an intelligent woman fully capable of protecting herself. the chemistry between Bogess and Veenstra is intense and we feel their frustration and pain. Best yet is Gaines, who reflecting back on the events of his life, rounds out the character with wisdom and humor. Also making us laugh is Darrie Lawrence who plays May's grandmother and family matriarch Mrs. Manson Mingott. Quite delightful.

What Are the Lowlights?
None. Go see it.

McGrath is a personal favorite. He received a Tony Award nomination for Best Book for Beautiful: The Carole King Musical, one of the best books for a "jukebox" style musical on Broadway. His first film as a writer and director was his adaptation of Jane Austen’s Emma, starring Gwyneth Paltrow -- another favorite, which I think is better than the novel.

Hughes, former artistic director at Long Wharf, also is a favorite director. He won the 2005 Tony Award for Doubt and received a Tony Award nomination for the play Frozen, which is one of the most riveting productions I ever have seen. He also directed Ayad Akhtar’s Junk on Broadway this season -- look for more nominations there.

Performances of The Age of Innocence continue through May 6 at Hartford Stage, 50 Church st., Hartford, Tuesday, Wednesday, Thursday, Sunday at 7:30 pm; Friday and Saturday at 8 pm; Saturday and Sunday at 2 pm. Tickets: www.hartfordstage.org; 860-527-5151.

Audio Described Performance— 2 pm Saturday, April 28 for patrons who are blind or have low vision — free service with admission.

Sara Norton, Dan Owens, Sara Schwab, Alessandro Gian Viviano, students from The Hartt School at the University of Hartford, are cast in the Ensemble.

Posted by LaurenYarger at 11:28 AM No comments:

The Revisionist
By Jesse Eisenberg

Directed by Sasha Bratt
Playhouse on Park
Through April 29

What's It All About?
The New England premiere of Jesse Eisenberg's play about family ties. David (Carl Howell) is a young book writer way past his deadline, so he shows up in Poland at the home of his 75-year-old second cousin, Maria (Cecelia Riddett), where he hopes to find some peace and quiet to revise his manuscript. Maria, who is so excited to have a visit from a family member, doesn't want to leave David alone, however. She wants to take him site seeing, to prepare big meas for him and to share family history. The old widow doesn't get many visitors, except for Zenon (Sebastian Buczyk), a friend who takes her in cab to run errands. Family is everything to Maria. Portraits cover the walls of her small flat (designed by Emily Nichols), especially since she lost most of hers in the Holocaust. But David shows little interest until one night, the two loosen up over some Vodka and some unsettling secrets find their way out of the family closet.

What Are the Highlights?
Tight direction by Sasha Bratt allows strong performances by Howel and Riddett to find their legs. The relationship between the two is dynamic and interesting to watch in its development.

What Are The Lowlights?
Eisenberg's play loses direction in the second act and we're not exactly sure where it is taking us.

More Information:
Each Sunday matinee includes a talkback with the cast and director. A special Tuesday matinee has been planned for April 24 at 2 pm. Performances are Wednesday and Thursday at 7:30 pm;
Friday and Saturday at 8 pm; Sunday at 2 pm through April 29 at Playhouse on Park,  244 Park Road, West Hartford. Tickets are $30-$40: www.playhouseonpark.org; 860-523-5900 x10.

Posted by LaurenYarger at 10:08 AM No comments:

An Evening With James Mapes

By Lauren Yarger
In the midst of the crazy end-of-theater-season schedule, I took a break to see a show I have been wanting to see for years: Master of the Imagination, featuring James Mapes, an actor, entertainer and showman, who recently performed a one-night-only performance of the show at Fairfield Theater Company's Stage One.

A Connecticut resident, Mapes delights with an evening of applied imagination -- what you might think of as mind reading -- rounded out with hypnosis, storytelling, humor and just a dash of magic. The show recently was performed as a fundraiser on hurricane-ravaged St. Thomas where he and his wife have a home.

A video with a welcome from Anthony Hopkins as well as island scenes shown to the tune of "Cheeseburger in Paradise" get the evening off to a fun start. Mapes states up front that he's not a  psychic. Instead, he uses suggestion and persuasion and the results are quite entertaining thanks to participation by audience members who allow Mapes to play with their subconscious minds.

In one demonstration, Mapes let's the audience in on secrets for being able to tell when a person is lying. He gives a number of $20 bills to a participant and takes one back each time the volunteer is caught in a lie. At the Fairfield show, Mapes had selected an audience member very skilled in deception and he lost one of the bills -- something that doesn't happen very often, he tells us. Roaring his hearty laugh, which brightens the performance throughout, Mapes accepted defeat while explaining how he missed -- what facial features or eye contact might have suggested truth.

Suddenly a man walked down the aisle and up on stage. He apparently had attended a previous show hosted by Mapes years ago when the hypnotist embedded a subconscious suggestion compelling the man to follow directions should he ever hear a particular prompt. Hearing the right words in dialogue during the show in Fairfield, the man followed the suggestion came forward and stepped up on stage. He had no idea that he had done so.

An extended hypnosis and age regression demonstration fills most of the second act of the show, which runs more than two hours. At Mapes's suggestion, people fall asleep on command and are unable to remember their own names. During intermission, audience members talked with each speculating on how Mapes had done some of his "tricks." The informal atmosphere allows the audience to feel like they are enjoying an evening with a friend and questions are welcome during the show as well.

Mapes's talent isn't limited to the stage, where he has presented several version of the show including A Journey to the Imagination. He puts his more than 40 years of studying human behavior into action as a motivational speaker working with major corporations like British Airways, Sprint, IBM and others whose employees have enjoyed his "Imagine That!," "True Leadership" or "Mind Over Body" programs. He has entertained government agencies and even was flown to Saudi Arabia where he amazed a sheikh. He also works with cancer patients to minimize pain and beeding during procedures.

His book, "Quantum Leap Thinking: An Owner's Guide to the Mind," deals with how to make quick,  positive change in one's life and his latest, "Imagine That: Igniting Your Brain for Creativity and Peak Performance" shows readers how to apply imagination to productivity.

Full disclosure: Mapes's wife, Susan Granger, is a theater critic colleague.
Posted by LaurenYarger at 5:56 AM No comments: