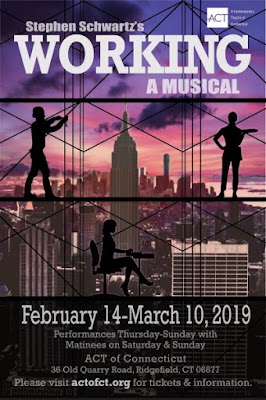 By Lauren Yarger
ACT of CT, (A Contemporary Theatre of Connecticut) bursts onto the scene as one of the state's finest professional theaters with its first offering of the 2019 season: an updated version of Stephen Schwartz's Working.

The show, conceived, adapted and directed by Artistic Director Daniel C. Levine, presents a montage of interviews and slices of life from various types of people working to make a living.  The original musical, based on Studs Terkel's book of the same name with music by Schwartz and Nina Faso, has gotten an update including video projections (with excellent media design by Caite Hevner) and new music by Craig Carnelia, Micki Grant, Lin-Manuel Miranda, Mary Rodgers, Susan Birkenhead, James Taylor and Schwartz.

A talented cast of six, all with strong vocals, portrays some 26 workers including a waitress, a financial manager, a project manager, a health care provider. a telephone customer service representative and a house wife, among others. The ensemble of Brad Greer, Andre Jordan, Cooper Grodin, Monica Ramirez, Zuri Washington, Laura Woyasz easily switch roles with the help of costume designer Brenda Phelps and Wig and Hair Supervisor Liz Printz) and entertain with choreography by Chip Abbott., who makes good use of the small stage.

Levine's expert direction stunningly creates storytelling as scenes appear  seemingly out of nowhere (assisted by Jack Mehler's rotating and moving set). He creates the illusion one moment of being in a bustling city,  then switches to a quiet moment highlighting one worker's intimate story. It's some of the best direction I have seen on a Connecticut stage.

The updates, including interviews with local Ridgefield workers, help make the work (the book was published in 1974) a bit more relevant.  One criticism: the sound (design by John Salutz0 is too loud for the small theater, especially for this show, where you need to relate to the workers, not feel that they are yelling at you.

Some additional information about the theater since this is the first review included on this site:

ACT of Connecticut (A Contemporary Theatre) is a nonprofit 501(c)(3) Equity theater located in Ridgefield, CT. Founded and led by three accomplished theater professionals (Executive Producer Katie Diamond, Peri and Levine), ACT of CT presents limited engagement runs of well-known Broadway plays and musicals, as well as world-premiere plays and musicals by the next generation of writers and composers. The theater company produces three shows per season, including one show in the “Presenting Stephen Schwartz” series, honoring ACT of CT’s Artistic Advisor, Stephen Schwartz.