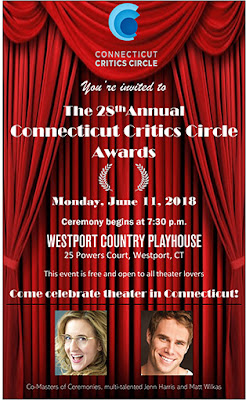 Special Awards To Be Announced

Posted by LaurenYarger at 11:47 AM No comments:

The Will Rogers Follies: A Life in Review
Book by Peter Stone
Music Composed and Arranged by Cy Coleman
Lyrics by Betty Comden and Adolph Green
Directed by Don Stephenson
Choreographed by Kelli Barclay
Goodspeed Opera House
Through June 21

By Lauren Yarger
What's It All About?
It's a light-hearted romp through the thoughts and musings of Will Rogers (the multi-talented David M Lutken, who delighted here in Connecticut and Off-Broadway in Woody Sez.)

This show, which offers some insight in to the entertainer's life, including his marriage to Betty Blake (Catherine Walker) opened on Broadway in 1991 and features music by Cy Coleman, Lyrics by Betty Comden and Adolph Green and a book by Peter Stone. The Zigfeld Follies provide the backdrop (designed by Walt Spangler) for the story as well as costuming by Ilona Somogyi and Choreography by Kelli Barclay, who provides lots of tap dancing..

What Are the Highlights?
Lutken is always a delight. He's completely likable and entertains with his soft, comforting voice, often accompanying himself on any number of instruments. He and Walker have good rapport. Rogers quotes are projected (design by Michael Clark) and the Lighting Design by Rob Denton is superb.One number with moonlight and starlight also offers spotlights on characters and colors to help set the mood. Well done!

What Are the Lowlights?
Besides a draggy pace, the material seems dated. Even though Will comments on newspaper headlines and tell s us "nothing can hurt more than telling the truth," somehow the dialogue doesn't feel contemporary and jokes fall flat. Political digs don't rally the audience. Lutken manages to carry the show, however, sometimes chiding the audience for not getting a joke right away. Don Stephenson's staging seems to want to over compensate.

Posted by LaurenYarger at 11:33 AM No comments:

By Lauren Yarger
What's It All About?
The sequel to Andrew Lloyd-Webber's long running, multi-award winning Phantom of the Opera (still playing in New York after more than 30 years). It's 1907, 10 years after the tragic events in the labyrinth beneath the Paris Opera House when the Phantom (Gardar Thor Cortes) vanished. The young soprano, Chritine Daae (Meghan Picerno) was finally free of the mentor who tormented her soul with operatic compositions and she married her childhood sweetheart, Raoul, vicomte de Chagny (Christian Harmston). But all is not as it seems. The phantom escaped, thanks to his ally, Madame Giry (Karen Mason) and her daughter, Meg (Mary Michael Batterson), and has relocated to New York's Coney Island, where he blends in with a bunch of circus freaks as part of a vaudevillian circus show.

In need of money, because an unhappy Raoul has hit hard times (after hitting the bottle pretty hard), Christine accepts an invitation from Oscar Hammerstein to sing in New York. When the couple and their young son, Gustave (Jake Heston Miller) arrive in the USA, however, they discover that the phantom has re-entered their lives. He uses threats against her son to get Christine to agree to sing his music and his attention for his old flame sets off thoughts of jealousy and revenge for Madame Giry and Meg.

What Are the Highlights?
Very strong vocals and a pleasing score from Sir Webber, even if it doesn't come close to matching the original. Still, some songs contain exquisite melodies and odd and haunting notes (the title song will create an ear worm). The stand-out performance comes from young Miller, who is about as perfect a child actor as I ever have seen. He has an angelic voice and an easy, natural way on stage. I kind of wish this story could have been all about him.

The sound (Mick Potter, design), notoriously a problem at the Bushnell, this time is perfection.

What Are the Lowlights?
The book. What a poor sequel. What a poor form of storytelling. If the first act has you feeling dissatisfied (and weak, predictable lyrics by Glenn Slater contribute to this state), the second act is min=blowingly bad. I felt like my brain exploded from all of the re-write possibilities that filled it. Any one of them would have created a more satisfying story and given characters more development. As it is, we have no idea why anyone does anything. Some action is so ridiculous (and looks so with Simon Phillip's direction) that it is laughable, including what is supposed to be a very dramatic ending. Gaston Leroux (who wrote the novel on which the original was based), we're wishing you were somehow here again.

To avoid spoilers, I don't feel I can fill in details, but if you are a fan of Phantom, which I definitely am, having seen it numerous times since it took Broadway by storm in 1988, I can't help but warn you that you probably will be disappointed. One mystery can be revealed, however: why this show has toured nationally and internationally, but never come to Broadway. The answer: because in its present state it would be massacred by the critics. Instead, the show can benefit from fans (there are more than 40 million who have seen Phantom) who will venture out to see a sequel to a favorite. Just remember. You have been warmed.

The new touring production reflects an extensive re-working of the material by an Australian creative team for the original Australian premiere in 2011. New set and costume designs by Gabriela Tylesova, choreography by Graeme Murphy, lighting design by Nick Schlieper.
Posted by LaurenYarger at 10:53 AM No comments: