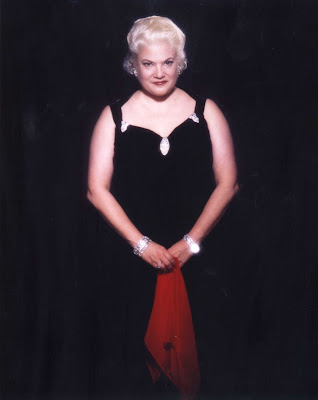 Sharon McNight stars at Seven Angels Theatre in the show she wrote about Sophie Tucker, Connecticut’s own Red Hot Mama, who enjoyed fame from her Burlesque days to Broadway and beyond.
We asked her to discuss the star and this role of a lifetime.
CTAC: How were you first drawn to write this show about Sophie Tucker?
SM: The man who first signed me to a recording contract had a dream that he saw me playing her on the Broadway stage.    I believe in omens and dreams
CTAC: Do you see similarities between her performance and your cabaret shows?
SM: They’re both live, real, old-time entertainment.    Nightclub shows.  We both make you laugh and cry.   “Come to our party.  You’ll have a good time”
CTAC: What's your favorite story about Sophie?
SM: Her father switching papers with a dead Italian man on the boat on the way over to America, the fear of religious persecution being so strong. And she didn’t sing in Yiddish, but her writer refused to let her record “My Yiddishe Mama” unless she did.  She learned the phonetics, and it was the first million record seller in history.
CTAC: What are your favorite songs form her repertoire and why?
SM: I’ve got 60 years of music to choose from:  Irving Berlin, the Gershwins, Cole  Porter.   Music from 1906 to 1966.  Jack Yellen wrote all her special material, unique to her personality.
CTAC: How much of her personal life shaped her performances and career success?
SM: Every aspect of her life was an integral part for her success.  She was motivated by her childhood poverty and took care of her family all her life.
CTAC: How has performing this show helped you grow as a performer?
SM: First, since Ii wrote it, it encouraged me to start writing again.  I’ve been performing for over 40 years.   I think my growth has come from the challenge of making something fresh every performance.   Actually it’s easy with great material.
CTAC: How can modern audiences relate to this show, about a performer who was most popular in the ‘20s and ‘30s?
SM: You have your dates wrong.   From the ‘20s until the day she died in 1966, she was very popular.  Men loved her because she was risqué and woman loved her because she was liberated.  She was booked at the Latin Quarter in Times Square for 28 weeks when she died.
CTAC: And finally, tell us a bit about your time at Yale Cabaret and the Eugene O'Neill -- and developing the next generation of performers.
SM: I teach what I sing, and I sing what I teach.  Vocal contests on TV have taught singers some bad habits, but worse than that, have taught audiences incorrect responses to the music -vocal gymnastics or clapping when there is a key change – wrong!!!   Why??  Because music instruction in our schools has been eliminated.  Rhythm is an innate human response.  We took the music away and were left with rap.  Music teaches you mathematics and discipline. It brings joy to the spirit of anyone involved in it.   Think of the countries or religions that don’t allow music in their culture.

It is the story of a woman - her professional triumphs and personal sacrifices during sixty years of survival in show business.  Illustrating the contrast between Sophie’s on-stage persona, “The Last of the Red Hot Mamas”, and the real behind-the-scenes woman, it encompasses six decades of entertainment utilizing the original musical material that made Tucker famous. Stan Freeman Music Directs. Songs include “Some of These Days,”“After You’ve Gone,”and her so-called “naughty songs:” “There’s Company in the Parlor,” “Girls” and “Come on Down."

Sharon McNight Bio:
Sharon McNight made her Broadway debut in 1989 in Starmites, creating the role of Diva, and receiving a Tony award nomination as “Best Leading Actress in a Musical” for her performance.
The singer/comedienne’s regional credits include Amanda McBroom’s Heartbeats at the Pasadena Playhouse, and an award winning Dolly in Hello, Dolly! at the Peninsula Civic Light Opera. Sharon was Sister Hubert in Nunsense in Los Angeles and San Francisco, where she received the Bay Area Critics Circle award for her performance.

McNight began her career in San Francisco where she received her Master of Arts degree in directing from San Francisco State. She taught a City College of S.F., has been a master teacher at the Eugene O’Neill Theater Center, and is on the faculty of the Cabaret Conference at Yale University. She has served as honorary chair of the San Francisco AIDS Emergency Fund.
Posted by LaurenYarger at 11:36 AM