If you missed it, don't fret. Tyzik, a conductor with the Rochester Philharmonic Orchestra, will be back next season with a brand new Nat King Cole program, the HSO has announced.

A sold-out house enjoyed the delightful Broadway concert, featuring a wide selection of songs performed by Noll, best known for her role in Jekyll & Hyde, and LaBrecque, who has played both the good looking and not-so-good-looking leads in Phantom of the Opera.

The orchestra excelled, playing selections from Phantom, My Fair Lady (in an medley arrangement by Robert Russell Bennett, the original orchestrator for Oklahoma), West Side Story and Jesus Christ Superstar. 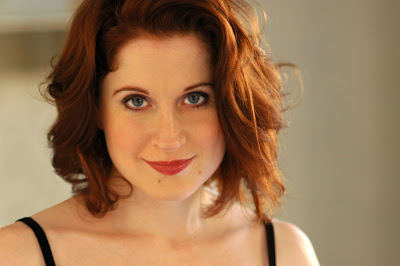 Noll (left), dazzling in a number of blue evening dresses, showed off her operatic range in some show tunes from the last part of the 20th century as well as a moving rendition of "Think of Me" from Phantom. (I would have loved to hear all of "In His Eyes" from J&H instead of the small teaser to which we were treated). 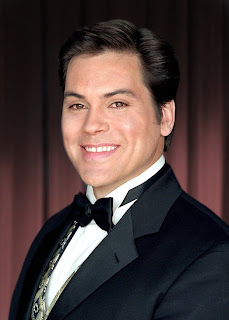 LaBrecque (right) showed versatility performing the fun, humorous "It's All for the Best" from Godspell as well as his signature "Music of the Night" from Phantom.

The singers performed some duets, shared some Broadway history and had some fun breaking with tradition in a fun number that had Noll singing songs like "If I Were a Rich Man" and other numbers sung by males while LaBrecque countered with his own repertoire of tunes associated with divas.

Fun accented the concert throughout, with Tyzik ad libbing when a chair fell off the orchestra risers at the start of the second act and again when he stopped the concert explaining he had made an error that just "train wrecked the orchestra" and asking LaBrecque to restart his number.

In other news, the HSO has announced the continuation of its summer series at Talcott Mountain in Simsbury. The "the Sounds of Summer" will be presented June 25- July 16 under the stars at the Performing Arts Center at Simsbury Meadows thanks to recent funding announced from The Richard P. Garmany Fund and the Hartford Foundation for Public Giving, among other sponsors.

For more information about upcoming concerts or to purchase tickets, visit http://www.hartfordsymphony.org/.

Note: In the interest of full disclosure, Ken Trestman, whose lighting design I comment favorably on is a personal friend, but I do believe I would have said the same thing whether I knew him or not.
Posted by LaurenYarger at 5:10 PM