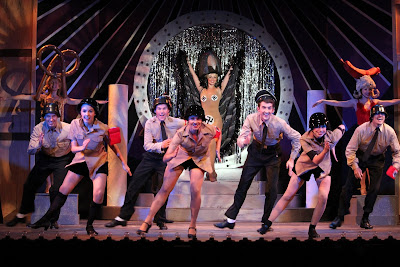 “Springtime for Hitler.” Photo courtesy of Anne Hudson
The Producers
Ivoryton Playhouse
Book By Mel Brooks and Thomas Meehan
Music and Lyrics by Mel Brooks
Directed by Julie Kiley
Choreographed by JR Brunn
Music Direction by John Sebastian DeNicola
Highlights: The Producers, which played to packed houses on Broadway and stormed the Tonys is the biggest musical in scope every produced at the playhouse (and probably broke records at budget meetings with its need for elaborate sets and lots of costumes (Vivianna Lamb, design) and wigs (Joel Silvestro, design) to stuff the huge cast of 17 into).
The silly plot follows Broadway producers Max Bialystock (R. Bruce Connelly) and Leo Bloom (Michael McDermott) who concoct a scheme to mount the biggest flop ever so they can write it off and live on the money invested by a group of sex-deprived little old ladies. They find the perfect show: "Springtime for Hitler," written by Franz Liebkind (Mark Woodard) who feels that his hero, Adolph, has gotten a bum wrap. Max and Leo hire inept director Roger DeBris (William Broderick) and his flamingly gay assistant Carmen Ghia (Guilford, CT resident Schuyler Beeman) to stage the theatrical horror and hire Swedish bombshell Ulla (Liz Clark Golson) to star in it -- and to be a piece of eye candy around the office (it's typical Mel Brooks humor -- no one is safe from stereotype or possible offense). When Leo and Ulla find romance and the show ends up being a hit, the producers find their relationship and their ability to avoid the law strained.
Connelly evokes memories of Nathan Lane (who starred as Max on Broadway), but makes the role his own. Golson, Beeman and Woodard go over the top to create their stereotypical characters and Broderick lends a more sophisticated -- if such a word can be used to describe a man dressed as the Chrysler Building -- flair to his. The vocals are good and a tap-dance number in the ridiculous "Springtime" show is well done.
Lowlights: With the huge production of The Producers, the Playhouse may have bitten off more than it can chew. The large-scale numbers look cramped on the small stage, leaving Brunn little room for choreography. Budgets for sets (Tony Andrea designs the many set changes)  and wigs look like they are stretched too far and a sound mix that allows us to hear all of the performers isn't consistently achieved. In addition, the confident, solidly built McDermott appears miscast as the frail and timid Leo (though his voice is lovely).
More information: The Producers runs through July 31 at the Ivoryton Playhouse, 103 Main St.
Performance times are Wednesday and Sunday matinees at 2 pm. Evening performances are Wednesday and Thursday at 7:30, Friday and Saturday at 8. Tickets are $40 for adults, $35 for seniors, $20 for students and $15 for children and are available by calling the Playhouse box office at 860-767-7318 or by visiting www.ivorytonplayhouse.org.
Posted by LaurenYarger at 6:18 PM