Daniel Davis (you probably best know him as Niles the butler on TV's "The Nanny") heads a fine cast in the tale of betrayal, forgiveness and redemption, but those themes, along with the storyline, at times seems to drown in the sea of colorful images.

The vision is set in the first scene, a clever and breathtaking depiction of the tempest and the shipwreck which brings a host of characters to a remote island previously inhabited only by  Prospero (Davis), his daughter, Miranda (Sara Topham), Caliban (Ben Cole), a spirit named Ariel (Shirine Babb) and various other spirits, gods and goddesses (Jane Cracovaner, Joshua Dean, Annastasia Duffany and Jillian Greenberg). 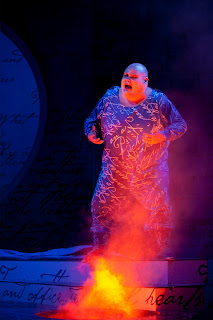 Arriving in the storm conjured up by Prospero's mighty powers are Alonso, King of Naples (Christopher Randolph), his son, Ferdinand (William Patrick Riley), whom Alonso thinks has been lost at sea, and Alonso's brother, Sebastian (David Barlow) in addition to Prospero's brother, Antonio (Jonathan Lincoln Fried), who with Alonso's help, had usurped Propsero as the Duke of Milan. Washing up with them on shore are a host of characters (played by Noble Shropshire, Alex Saffer, Michael Spencer-Davis, Bruce Turk and Dean.)
When Miranda lays eyes on the first man she's ever seen besides her father and his grotesque slave, Caliban, it's love at first sight. Thankfully Ferdinand returns the affection, but Prospero refuses to give his approval to the match. There are plots against Prospero's life, some drunken sport (the mocking of Caliban seems particularly cruel-edged in this version) and some Shakespeare-style humor enhanced by Tresnjak's interpretation.
Davis is compelling as the wronged man who treads water until he finds a way to ride a wave of forgiveness. Turning in some noteworthy performances are Cole as the tormented. mistreated slave, Babb as the mischievous spirit longing for freedom and Barlow, who gives one of the most engaging performances in a smaller role.
The story lack cohesion and the actors don't come together or bounce off of each other, however, because attention is mostly on the the spectacle of the play, rather than on its substance. And it is beautiful to behold. Alexander Dodge's set is splashed with dialogue from the play in the Bard's handwriting on a blue background. It is at once an ocean tossing a helpless ship and the sands of the beach on which it runs aground (with the help of excellent lighting designed by Michael Chybowski).

A circular map of the world on the backdrop of the set is removed to reveal a staging area for the staging of portraits. Fabio Toblini's costume design borrows the handwriting theme which allows characters to blend into the scene. Spirits attach themselves to areas around the circle or up on the massive bookcases framing the set (Shakespearian students will know that when Prospero was deposed and set adrift with 3-year-old Miranda, he took his books with him), part of the scene, but not, to create some wonderful tableaux.

The highlight of the beautiful staging is an aerial/ ballet number by the spirits with original music (and sound design) by David Budries and Nathan a. Roberts (Babb lends a beautiful singing voice to the production). Dean, who serves as aerial consultant, performs above the stage flying on strips of fabric, à la Cirque du Soleil.

The Tempest is the first production selected by Tresnjak who began as the theater's new artistic director this year. It runs through June 10 at Hartford stage, 50 Church st., Hartford. Tickets and info: http://www.hartfordstage.org/show/tempest; 860-527-5151.

Hartford Stage YoungCompany to hold audition for Breakdancing Shakespeare: Much Ado About Nothing

What:
Hartford Stage Young Company, in conjunction with the Greater Hartford Arts Council’s Neighborhood Studios, will hold general auditions for Breakdancing Shakespeare: Much Ado About Nothing on Wednesday, May 23. Breakdancing Shakespeare: Much Ado About Nothing is a modern take on Shakespeare’sclassic comedy exploring life’s deceptions, both large and small. In this reimagined version of the play,students use breakdancing and hip hop to help make Shakespeare’s language accessible to audiences of all ages. This is a paid,six-week rehearsal process involving 16 Greater Hartford area students. Over the course of the summer, students will learn techniques of breakdancing, physical and vocal characterization,movement, and interpretation of classical text, culminating in two final performances on Monday, Aug. 6.

How:
Visit the Greater Hartford Arts Council website to download more information and an application. Go to www.letsgoarts.org, clickon Arts in Education, then select Neighborhood Studios.
Posted by LaurenYarger at 6:19 AM