Preview of What's Hot on Connecticut Stages in 2016

Top Connecticut Theater Picks for 2016
By Lauren Yarger
As a new year begins, Connecticut’s professional theater scene offers many exciting viewing opportunities including premieres of new shows as well as some old some old favorites. What shows am I most looking forward to? Here are some tops picks for 2016:

Dark Tresnjak directs a new musical adaptation of Anastasia, inspired by the 1956 and 1997 (animated) films May 12-June 12. The project has received a $10,000 National Endowment for the Arts award and reunites Ragtime creatives Terrence McNally (book), Stephen Flaherty (music), and Lynn Ahrens (lyrics). Joshua Bergasse will choreograph.
Flaherty and Ahrens also co-wrote On the Town Once on This Island, Seussical, My Favorite Year and Rocky. The songwriting team was nominated for the Academy Award for “Journey to the Past” from the animated film Anastasia. I wouldn’t be surprised to hear that Anastasia will make a transfer to Broadway and put Tresnjak in the running for another shot at the Tony Award for Best Direction of a Musical (he won the Tony, Drama Desk and Outer Critics awards for A Gentleman’s Guide to Love and Murder, which also premiered at Hartford Stage).

THEATERWORKS
One of my favorite Off-Broadway experiences gets a staging at TheaterWorks Jan.8- Feb. 14. Buyer and Cellar by Jonathan Tolins is a riotous story of a wannabe actor who gets hired for an unusual acting job: he portrays a variety of salespeople in a mall built under the Malibu home of Barbra Streisand. She houses a number of collections in make-believe stores in her cellar where she pretends to shop. It’s bizarre and even funnier because there’s some truth poking through – Streisand really does have some shops at home as she tells in her book, “My Passion for Design,” which plays a role in the script. I laughed all the way through this show in New York and still enjoy Streisand’s book, which I received as a gift from my theater companion who was inspired to buy it for us following the show. Tom Lenk, best known for his work on TV’s “Buffy the Vampire Slayer,” stars.
Also on stage at TheaterWorks:
Sex With Strangers
March 11- April 17
The Call
May 13- June 19
Midsummer (A Play with Songs)
July 15-  Aug. 21
Info and tickets: (860) 527-7838;  theaterworkshartford.org

The Moors by Jen Silverman and directed by Jackson Gay, gets its world premiere Jan. 29–Feb. 20. Two spinster sisters—one desperately unhappy, the other resolutely miserable—live with their elder brother and their dog in a gloomy, old mansion on the moors (sound familiar?)  Gothic romance, a governess and even a little dark comedy are on tap.  The play received a 2015 Edgerton Foundation New American Plays Award.

The Lion, one of last season’s most talked about shows Off-Broadway  -- it won the Drama Desk Award for Outstanding Solo Performance -- makes a tour stop in New Haven Jan. 6-Feb. 7. Written and performed by Benjamin Scheuer, it is one man’s gripping coming-of-age story (to the tune of six guitars).
I also am looking forward to a new musical, My Paris, about the life of Henri de Toulouse-Lautrec with music and lyrics by Charles Aznavour. The book is by Pulitzer-Prize winner Alfred Uhry (Driving Miss Daisy) with English Lyrics and Musical Adaptation by Jason Robert Brown (The Last Five Years, The Bridges of Madison County). Directed and Choreographed by Kathleen Marshall, this musical replaces the previously announced Shining City May 4 – 29.

Be on the cutting edge and experience what might be tomorrow’s big hit today. The 11th annual Goodspeed Festival of New Musicals offers three days of brand-new works Jan. 15-17. Highlights include a staged reading of a new Southern Gothic musical, We Foxes, by Ryan Scott Oliver, the musical comedy Milo at the Movies by Tom Diggs and Mark Gaylord and Only Anne by John Dietrich and Will Buck. Special guests include Alfred Uhry, Michael Riedel, Rick Miramontez, Michael Weiner, Alan Zachary and Colin McEnroe.

As always, Goodspeed also offers some old musical favorites at the Opera House, as well as some shows in development over at the Norma Terris (I am excited to see listed Roar of the Greasepaint, the Smell of the Crowd, a show I always have wanted to see, May 19-June 26.)

I’ll admit it. While everyone else was attending Queen concerts back in the 1970s, I was singing “Take Me Home Country Roads,” with John Denver. Home Again: On the Road with John Denver by Randal Mylar and Dan Wheetman offers a show of Denver’s music along with some of his life story. Ivoryton presents the Connecticut premiere April 6-24. David Lutken (who dazzled in Woody Sez at TheaterWorks), stars. Far out! I’ll be there feeling “Rocky Mountain High.”

A new adaptation of Jane Austen’s first published novel, Sense and Sensibility, will take the stage at UConn Feb. 25-March 6. The penniless Dashwood sisters, one sensible, one full of passion, find love and happiness via different paths. This version is co-written by Joseph Hanreddy and J.R. Sullivan, the same writing team behind CRT’s Pride and Prejudice in 2012. 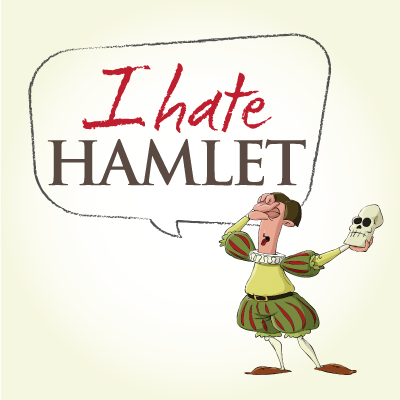 Coming off a fabulous production of Passing Strange, this up-and-coming theater company presents an interesting-sounding show called I Hate Hamlet by Paul Rudnick. Directed by Vince Tycer, Feb. 24-March 13. A successful TV actor is offered the role of Hamlet on stage.  A couple of problems present themselves, however: he hates Hamlet and John Barrymore’s ghost is haunting him.

Also on stage at the Bushnell:

From Ayad Akhtar, the Pulitzer Prize winning playwright of Disgraced, comes The Invisible Hand July 19 - Aug 6.When an American futures trader is kidnapped and held hostage in Pakistan, he knows the only way to get home is to do what he does best: play the market like his life depends on it. David Kennedy directs.

The Playhouse opens its season with two plays about art presented in repertory: Art/Red, May 3-29


A favorite (and I am not alone -- it won the Tony for Best Play -- ), Vanya and Sonia and Masha and Spike, by Christopher Durang gets a run Feb. 26-March 13. It's a send up of Chekhov, but this play is actually entertaining (sorry, not a Chekhov fan).... A brother and sister get a visit form their famous movie-star sister who arrives with her boy-toy, Spike, Lots of heavy thinking, angst,  birds and laughs ensue.

Also on stage at MTC:
The Last Five Years
April 8-24

Also on stage at Seven Angels:

Another pleasant trip back to the 1970s will spin BeeGees tunes and if I'm not mistaken, some disco ball refelctions in a musical version of Saturday Night Fever Feb. 19-20.

The story (made famous in the 1977 movie starring John Travolta) of a kid who loves to dance and the girl who loves to dance whom he loves...... is iconic. Theatergoers will be able to have an interactive experience as well with a Post-Show Disco Dance Party at the theater's Poli Club following the Friday and Saturday evening performances of the show.

Also on stage at The Palace:
Let It Be: A Celebration Of The Music Of The Beatles
Apr. 15-16

Posted by LaurenYarger at 8:42 AM