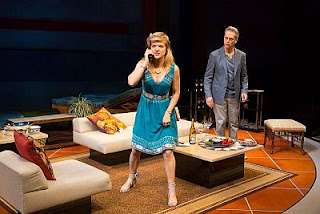 By Lauren Yarger
What's It All About? Good question. Let's say that you might be able to figure that out before the explanation of the bizarre plot you have just seen is spelled out at the end, but for many the world premiere play from comedian Steve Martin ( presented by Long Wharf in conjunction with the Old Globe in San Diego), is a real puzzler.

Two couples get together to watch a meteor shower at the Ojai, CA home of Corky and Norm (Arden Myrin and Patrick Breen). Norm has invited Gerald and Laura (Craig Bierko -- I saw excellent understudy Josh Stamberg) and Sophia Brown, whom they don't know well, but who know another couple, the husband of which, Norm is eager to meet for work. He probably should have thought that through a bit because Gerald and Laura are very strange. Gerald's kind of funny and larger than life -- think Steve Martin -- and Laura is rude and blatantly sexual in her approach to Norm.

But wait, Norm and Corky are kind of weird too. They old hands and recite mantras learned through some sort of marriage therapy training for yuppies. And when a meteorite takes Norm out of the picture, Corky isn't too affected.

Wait again! Maybe that meteorite didn't really hit. Something seems to be wrong with perception here as scenes repeat from different perspectives. Just what is going on as the meteors light up the sky( Lighting Design by John Holder). The fantasy-inspired Orignial Music by John Gromada (who also designs the sound and three eggplants might provide some clues. Or maybe not.

If you aren't quite sure, you won't be alone (at intermission I wrote in my notes, "I have no idea what is going on." Michael Yeargan designs the upscale patio which rotates to help change perspective, but not enough to help Director Gordon Edelstein convey what is taking place.

There are some funny moments -- more than I found in Martin's other plays given a run at Long Wharf like The Underpants and Picasso at the Lapin Agile.  Norm's return to the action following the meteor strike certainly is humorous, thanks in part to Costume Design by Jess Goldstein. The script, however, is so bizarre and nonsensical, that we are wondering what is going on most of the time instead of enjoying some insightful humor. A good edit and a trim of the one-hour, 45 minute run time would make a big difference.

Posted by LaurenYarger at 2:32 PM