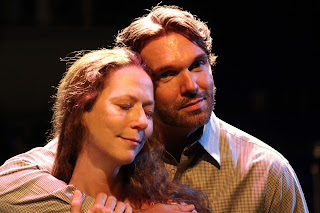 The Bridges of Madison County
Music and Lyrics by Jason Robert Brown
Book by Marsha Norman, based on the novel by Robert James Waller
Musical Direction by Nolan Bonvouloir
Directed by Kevin Connors
Music Theatre of Connecticut'
Through Nov. 19

By Lauren Yarger
Music Theatre of Connecticut is the little theater that could when it comes to producing big musicals and Director Kevin Connors is the engineer.

Jason Robert Brown's sweeping The Bridges of Madison County is the latest of the big Broadway musicals to appear n MTC's intimate stage with stunning results. When I heard a few years ago that MTC was attempting to stage Next to Normal, I scoffed (sorry, but it's true). It is a very difficult score requiring most of the cast to belt into the rafters. And this show on Broadway had rafters -- a multi-leveled set depicting the frame of the family's house which became a character of sorts itself as lighting design brought to life the electrical impulses in the brain of a character suffering from Bi-Polar Disorder. How could that ever translate to the tiny little stage (then in the old theater in Westport that seated about 50)?

Connors made me eat any doubt I might have had. He cast Juliet Lambert Pratt in the lead and with a strong cast, transformed that small space into a storytelling wonderland.

Then, when MTC moved to its new space -- a bit larger, but still small and intimate -- Connors tackled Andrew Lloyd Webber's big-scale musical Evita. While Next to Normal has a small cast and seemed more likely to fit in a smaller setting, Evita certainly did not.  Again, I was very pleasantly surprised to see the re-imagined musical come to life in small scale, with emphasis given to relationships. Scenes came into focus in a way they never had in the big-stage version and I decided then and there to stop doubting.

When I saw The Bridge of Madison County on MTC's 2017-2018 season, my first instinct was to think, "Are you kidding?" The huge score is very difficult -- Kelli O'Hara and Steven Pasquale, two of the best voices on the Great White Way, had starred in the Broadway version and sang their lungs out -- not to mention accompaniment by a full orchestra to convey the complexity of the music. Sets had depicted the sprawling Iowa sky. Before doubt could set in, I remembered the past two shows I thought would be impossible to mount on a small stage in Connecticut and went to the theater with eager anticipation. I wasn't disappointed.

If you are wondering why I have chosen to comment more personally, instead of getting right to a show review, it is because I want to make sure that none of my readers are making the same assumptions I was about whether or not these musicals are worth seeing at MTC. They definitely are.

For Francesca, the bored Iowa housewife in Bridges, Connors again taps Pratt (who won the CT Critics Circle Outstanding Actress Award for her performance in Next to Normal). The belting is there. So are the multi layers of Francesca, who is torn between her lover and her family. Sean Hayden is Robert, a National Geographic photographer who falls in love with Francesca, while he is on assignment to shoot the covered bridges in Madison, County. His rugged good looks and silvery voice are just right for the part. It's a pleasure to hear these songs again, especially "It All Fades Away."

Marsha Norman's book improves the story from Robert James Waller's bestselling novel (which I couldn't get through) and the screenplay, which miscast Meryl Streep and Clint Eastwood in the main roles. Norman rounds out the love story with development of Francesca's family: husband Bud (George Roderick), daughter Carolyn (Megan O'Callaghan and son, Michael (Matt Grasso.) She also adds humor through neighbors Marge and Charlie, delightfully portrayed by Kristi Carnahan and Frank Mastrone. We even meet Francesca's sister, Chiara (Mia Scarpa),, in flashbacks of how Bud met his war bride back in Italy. All of these other folks, and Francesca's relationship with them, help us understand the decisions she makes.

Nolan Bonvouloir music directs and plays keyboard for a four-person band house on a platform at the rear of center stage (a cello, violin and guitar are all that are needed to bring Brown's score and orchestrations to life). The sides of the upper platform serve as various locations while most of the action takes place on the floor. A few props are all that is needed to transform scenes from Francesca's farmhouse to the Roseman Bridge (a couple of gables hang from above) to a journey in a truck. (Set Design by Jordan Janota).

The Bridges of Madison County is Kevin Connors' gift of big theater magic in a small package. Don't miss an opportunity to hear this beautiful score performed really well, both vocally and instrumentally.