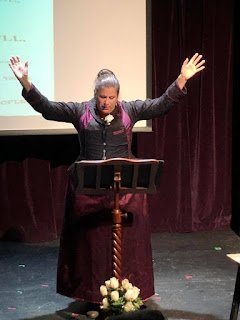 Toast the Vote!
Join the CT Chapter of the League of Professional Theatre Women for three online play-excerpt readings to celebrate the 100th anniversary of the 19th Amendment, giving women the vote.
July 22, 2020 -- The Woodhull Project by Emma Palzere-Rae

Aug. 12, 2020 -- Lifting As We Climb by Charlene A. Donaghy. Inspired by Mary Eliza Church Terrell. Commissioned for WomenKind 2020. Reading by Jackie Davis.


Sept. 23, 2020 -- Susan B. by Toby Armour
Each session will be held from 5 to 6 pm (Eastern). Playwrights will be on hand for Q & A following the presentations, which will be moderated by Virginia Wolf. Bring a glass of champagne or your favorite beverage to toast the pioneers who led the way to winning the vote for women. We are looking forward to seeing you online!


You must RSVP for each session you wish to attend. If you are not a member of the League, please enter BWW when prompted for the name of the memebr who invited you. Verified attendees will receive a Zoom link to attend the session closer to the date. If you register, but then find you cannot attend, please cancel your reservation here on Eventbrite so the slot may be given to someone else. Slots for each session are limited.

The Woodhull Project by Emma Palzere-Rae*
July 22
Known as a Free Lover, Victoria Woodhull was the first woman to speak before U.S. Congress, the first woman to open a stock brokerage firm, the first woman to publish a newspaper, and the first woman to run for U.S. president. You won't want to miss the chance to meet this woman who was written out of history as she visits "here and now" from 1872 to reflect on politics and women's rights through a flashback or two of her extraordinary and scandalous life.

Lifting As We Climb By Charlene A. Donaghy
Inspired by Mary Eliza Church Terrell
Commissioned for WomenKind 2020
Aug, 12, 2020
Excerpt will be read by Jackie Davis.

Mary Eliza Church Terrell was a well-known African-American activist who championed racial equality and women's suffrage in the late 19th and early 20th century. An Oberlin College graduate, Terrell was part of the rising black middle and upper class who used their position to fight racial discrimination.

Synopsis: The 19th Amendment to the U.S. Constitution, granting American women the right to vote, is making 1920 a banner year for suffragists. Ratification power sits in the hands of white Tennessee legislators and, in order to appease them, white suffragists have distanced themselves from African American suffragists. Mary Church Terrell, a founding member of the National Association of Colored Women, racial equality activist, and ardent suffragist who has worked alongside her white counterparts, discovers this when she and her sisters-in-arms are asked to curb their activities. Now Mary must decide her future role in the movement and in a relationship with women she trusted, answering the question: did these women break faith for their own sakes or were they acting for the greater good?

Susan B. by Toby Armour*
Sept. 23, 2020
Why did Susan B. Anthony became a suffragist instead of a Quaker minister? Her decision is revealed in the reading of a new play titled "Susan B." by award-winning playwright Toby Armour.

Toby is the national winner of the Lewis Prize and is the playwright in residence at the Fringe Theatre in Key West, Florida. Her plays have been presented in New York City, Boston, Los Angeles, Atlanta as well as London, Edinburgh and Tipperary, Ireland. "Susan B." is the first part of Armour's latest work titled "Aunt Susan and Her Tennessee Waltz." The two-part play will premiere at the Theater for the New City in New York in January, 2020.

ABOUT THE PLAYWRIGHTS
Charlene A. Donaghy's plays have been produced and awarded from New York to Los Angeles, in Great Britain and Canada. Hansen Publishing Group publishes Charlene's play collection: Bones of Home and Other Plays. Other publications include Best American Short Plays (3x), Best Ten Minute Plays 2018, 25*10-Minute Plays for Teens, and Estrogenius, a Celebration of Female Voices (2x). Charlene is Producing Director of the Tennessee Williams Theater Festival and Festival Director of the Warner International Playwrights Festival. She is co-founder of the Association of Theatre in Higher Education Judith Royer Award of Excellence in Playwriting. She teaches playwriting, fiction writing, and theater at University of Nebraska Omaha, is a founding member of Boston's Proscenium Playwrights, a core member of NYC's 9th Floor Playwrights' and Artists' Collective, a member of The Playwrights Center, and The Dramatists Guild of America where she served as a Regional Representative for six years. Ms. Donaghy is a breast cancer survivor and holds true Tennessee Williams words in "Camino Real" Make Voyages! Attempt them! There's nothing else.

Jackie Davis* is an actor, director and choreographer working primarily on the east coast. She can be seen as abolitionist, Susan Robbins in Colombia Pictures' Film, Little Women (credited as JM Davis). Jackie is a member of Actors Equity Association and the Screen Actors Guild. She is currently part of the production team of From a Distance, a web-series, taking place in these days of COVID19. Notable theatrical directing credits include Race, Ruined, and For Colored Girls Who Consider Suicide When the Rainbow is Enuf. Notable theatrical choreography projects include Dance Nation, The Wiz and Caroline or Change. She is the founding artistic director of New Urban Theater Laboratory, where she produced and directed five years of new works in Massachusetts. Ms. Davis is involved in all three disciplines, theater, television and film. She was most recently seen on stage in Trinity Repertory Company's production of A tale of two cities.

Emma Palzere-Rae Emma Palzere-Rae is an actor, playwright, director, and producer. She spent 15 years in the NYC theater community, where she began producing one-woman plays and founded Be Well Productions and the Womenkind Festival. She is dedicated to telling untold women's stories through theater and believes in the healing power of theater. Emma's plays include Aunt Hattie's House, about what compelled Harriet Beecher Stowe to pen Uncle Tom's Cabin, Live from the Milky Way... It's Gilda Radner!, A Nice Place to Visit, and The Woodhull Project. Her one-woman plays tour throughout the country. Ms. Palzere-Rae is the former Artistic Director of Plays for Living, a theater for social change repertory company formerly located in NYC, and is the current Associate Director at Artreach, Inc. (Norwich, CT), which provides arts programming to adults living with mental illness. She is a member of Actor's Equity and the Dramatists Guild, where she serves as the Regional Representative for New England - West.

Toby Armour has spent much of her life in theater- as stagehand, dancer, choreographer, dance company director, theater director, and playwright. Her plays have been done in Boston, New York City, Los Angeles, Denver, elsewhere in this country, as well as London, Scotland and Ireland. She holds a doctorate in history and is a national award-winning playwright (The Lewis Prize) and Jerome Fellow, many of whose works are based on oral history and stories of community. Her plays about early New Haven are up on vimeo, as is Zebra telling the story of the famous Zebra in Stubb's painting at the Yale New Haven British Art Center. Part One of Susan B. and Her Tennessee Waltz has been live-streamed by Theater for the New City. The complete play will be presented by Theater for the New City this Fall or as soon as our new world permits.

Virginia Wolf, moderator
Ginny is a member of the Steering Committee for the CT Chapter of LPTW. She is host of “SpotLight, Radio Reveling in the Arts and Entertainment”, Thursdays at 12:30 on WLIS/WMRD (www.wliswmrd.net), covering arts and entertainment throughout Connecticut.  During this “intermission”, she is dedicating the show to storytelling, but looks forward to getting back to normal whenever it’s possible!

In addition, Virginia is founder of Herstory Theater, generally dedicated to bringing to life the unsung heroines of history, as well as producing a host of additional projects that both celebrate women and history, and a simple love of theater and performing (learn more at www.herstorytheater.com); works as a voiceover artist and audio book narrator; steps in as Katy Leary for the Living History Tours at the Mark Twain House and Museum; and can be found on stage whenever/wherever someone casts her!
Posted by LaurenYarger at 10:51 AM