Feature: In the Heights at the Bushnell 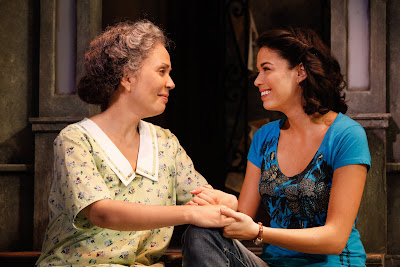 Elise Santora, left, and Arielle Jacobs
Washington Heights Meets Hartford
By Lauren Yarger
Washington Heights and some rhythms and beats not typical for a Broadway musical come to Hartford tonight as the tour of the Tony-award-winning musical In the Heights takes the stage at The Bushnell Center for the Performing Arts, not far from where Lin-Manual Miranda conceived the work when he was a sophomore at Wesleyan University.

The story is familiar: the hopes and dreams of members of a community amidst their struggles to fit in and find a place to call home, but this story is set to the salsa, merengue and hip-hop sounds that flow in the Latino upper Manhattan neighborhood where Miranda grew up. His score and the book by Quiara Alegría Hudes give the members of the first major Latino Broadway tour a sense of pride and belonging, said Elise Santora, who plays Abuela Claudia, the character who is the heart of the show.

Santora joined the tour directly from the Broadway company where she played Abuela and Daniela. (The show continues to play on Broadway at the Richard Rodgers Theatre.)
Santora has enjoyed making Abuela “her own” in the tour, which has been playing to standing ovations and enthusiastic responses, especially from younger audience members.

Younger kids are telling her they were “dragged” to the show, Santora said, but ended up thinking it is “cool.” Even those who might be surprised by the different style of music soon find themselves engrossed because the music is so intertwined with the story, which is universal, she said.

Santora and other Spanish speaking members of the cast have been part of special marketing campaigns along the tour route to reach out to Latinos. Here in Hartford, in an effort to help promote and spread the word about the show to the Latino community, the Bushnell has been working with Mega Education (a media-based scholastic incentive system designed to reward student efforts and achievement), Identidad Latina, La Voz Hispana, Telemundo and Univision, according to Amanda Savio Guay, communications manager.

The show also has some other Connecticut roots besides its inception at Wesleyan. In 2005, it was presented at the National Music Theater Conference at the Eugene O'Neill Theatre in Waterford, two years before an Off-Broadway incarnation that ran for 200 performances.

After its move to Broadway in 2008, the show won four Tony Awards including Best Musical, Best Original Score, Best Choreography and Best Orchestrations. Meanwhile, Universal Pictures has announced plans to adapt In The Heights as a feature film. Miranda and Meryl Poster, who executive produced the film Chicago, will produce. Hudes will pen the screenplay.