Feature: The Lion King at the Bushnell 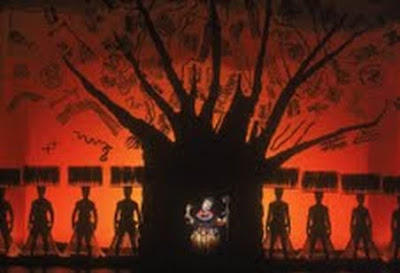 The Tree of Life from The Lion King National
Tour. Photo Credit: Joan Marcus.
Hartford Transforms into Pride Lands
with Help of Richard Hudson’s Sets
By Lauren Yarger
The stage at the Bushnell Center for the Performing Arts will be transformed into the African Pride Lands beginning this Wednesday thanks to set pieces, costumes and technical equipment trucked in on 18 semis to create the world of Disney’s The Lion King making its second tour stop here in Hartford from Jan. 27 through Feb. 14.

The man largely responsible for the look of the show, and who won a Tony Award for the Broadway design in 1998, is Richard Hudson, and while he found the challenge of bringing Africa to the American stage daunting, there is no question that this award-winning opera set designer was equal to the task.

He worked with director Julie Taymor, who was the first woman to win the Tony for best direction of a musical, to make scenes like the animated movie’s colossal pride rock and stampede come to life.

Hudson hadn’t seen the Disney cartoon movie prior to being contracted for the staging, but when he did, the thought of turning it into a show seemed “impossible.” Taymor’s vision, illustrated in some set mock ups inspired Hudson, however, and when it became clear that the team wasn’t trying to recreate the film, he began to see the possibilities.

The designer, who grew up in Zimbabwe, began to research African fabrics and textiles, and soon was remembering the colors and scale of the land of his youth. For pride rock (which rises from below the stage for the Broadway production, but which enters from the wings for the touring productions), Hudson made Taymor’s design a little less symmetrical and gave it the appearance of rising up form the ground as it would look to birds soaring above it.

For the stampede scene, which Hudson called the “most problematic,” he needed to show perspective that would make it appear that thousands of animals were running onto the stage with very little time in between scenes to accomplish the effect. He created a series of rollers with different sized animals on different levels and topped the effect off with performers in the show’s trademark puppet-costumes entering from below the stage and from the sides. The design creates a false perspective that still has audiences gasping at the visual effect.

Hudson lives in London, so he hasn’t had much chance to see the tours here in the United States. Connecticut Arts Connection caught up with the designer in New York where he is working on a production for the Metropolitan Opera and where he took in the Broadway production for the first time in many years.

“I was deeply moved,” he said. “It has been beautifully maintained.”

He saw the tour in Denver and recently attended a 10-year anniversary party for the London show. Some 86 actors who had played the children’s parts in the show over the years, many now adults, attended. The popularity of the show endures as the Broadway production continues to play to packed houses 12 years later and the tour coming to the Bushnell is one of seven companies world wide.

When asked why he hasn’t done more design on Broadway, Hudson replied that he’d love to, but hasn’t been asked. Maybe it’s time for some producers to make a call?

Winner of six Tony Awards, including best musical, The Lion King features hundreds of masks and puppets designed by Michael Curry and Taymor, who also designed the costumes. Choreography is by Garth Fagan, lighting design is by Donald Holder. The book has been adapted by Roger Allers, who co-directed the animated film and Irene Mecchi, who co-wrote the screenplay for The Lion King.

The Elton John score with Tim Rice lyrics from the animated film including songs like “Can You Feel the Love Tonight” and “Circle of Life” is part of the theatrical production, along with three new John/ Rice tunes with additional musical material by South African Lebo M, Mark Mancina, Jay Rifkin, Julie Taymor and Hans Zimmer.

Ticket prices start at $20.50. Additionally, Premium Ticket Packages, which include a prime seat location, a commemorative souvenir program and an exclusive merchandise item, also are available. Tickets are available at The Bushnell Box Office, 166 Capitol Ave., by phone at 860- 987-5900 and online at http://www.bushnell.org/. Orders for groups of 15or more may be placed by calling (860) 987-5959.

Note: The show has a strict 10-minute late seating hold once the performance begins.
Posted by LaurenYarger at 3:00 PM