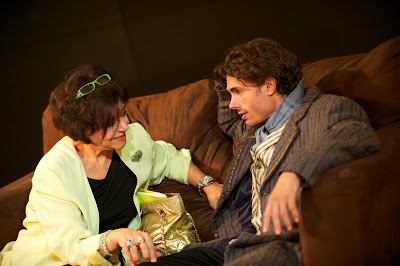 Kathryn Kates and Stephen Sherman
When All the World Really is a Stage -- and You Can't Remember Your Lines
By Lauren Yarger
Sarah Gray is experiencing an actor’s worst nightmare: she can’t remember her lines. No amount of memorization, rehearsal or prompting will help in this case, however, since the lines aren’t dialogue from a script, but the keys to her very real, everyday life, forgotten after a stroke.

This is the intriguing premise for Jacques Lamarre’s play Gray Matters getting a Hartford run this weekend at the Charter Oak Cultural Center by the Emerson Theater Collaborative (think very minimal set). The play arrives fresh from its award-nominated production at New York’s International Music Festival, complete with three members of the cast who join Connecticut resident Debi Freund taking over the role of Sarah.

Freund, directed by Joshua Lee Ramos, gives a moving performance as the actress who suffers a stroke onstage, then tries to cope with losing her fiancé, her daughter, her health insurance, her career, her privacy and last, but not least, her memory. Sarah valiantly tries to joke and convince those around her that she’s getting better all while grasping at threads of memory for their names and other knowledge that used to be easily accessible from her brain like her daughter’s phone number, the code for her voice mail, the location of her mailbox key and lines from – and sometimes even the titles of – the plays that brought her fame on the stage.

Her agent, Miriam Berger (a delightful Kathryn Kates, adorned in perfect flashy, wealthy agent attire) breaks through her “battle axe of Broadway” exterior to help her longtime client and friend by paying some of her medical bills and trying to get her to focus on getting back on the stage (and earning Miriam a commission). When the recovery process takes longer than she’d like, Miriam tricks Sarah into thinking she agreed to go on an audition. The actress isn’t ready and series of humorous-but-sad failed attempts to resume her career follow.

Meanwhile, her desperate financial situation forces Sarah to take in a roommate, Deja Smith (Jan Anaya), a young actress at the start of her career who talks incessantly about herself while insisting she’s a good listener. The girl is so flighty that she gives pause as to just how much gray matter she herself is packing. She becomes involved with Scott Leads (Stephen Sherman), the young actor who was on stage with Sarah when she had her stroke. They find they have something in common – they’re both self absorbed – and their “concern” for Sarah gives new meaning to the word shallow.

Anaya is humorous as the insensitive wannabe actress, but she and Sherman have a tendency to rush some of their lines, making them inaudible in the already acoustically-challenged space. Sherman never seems comfortable in the skin of his character.

The Connecticut playwright’s work is thought provoking, offers some hope and contains a nice balance of humor and drama, though it could use some tightening in places. Most notably, the final scene, though containing some humorous and moving lines, should be cut as it is superfluous and extends the hour-and-45-minute play with no intermission beyond its natural conclusion.

Catch the last two performances in this limited run of the play, inspired in part by a real-life story, tonight at 8 or tomorrow afternoon at 4 (read more about Jacques and the play at http://ctcritics.org/). Tickets are $25 ($23 for students and seniors) and can be obtained at www.emersontheatercollaborative.org. For additional information, call 860-705-9711.
Posted by LaurenYarger at 8:24 AM