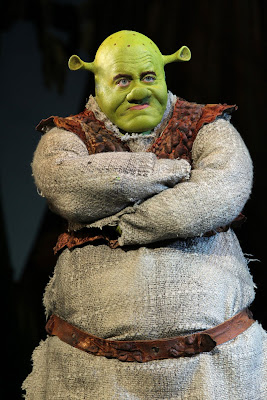 Movie-to-Stage Fun for the Family
By Lauren Yarger
He’s green, mean and so scary he makes people scream, but underneath that ogre exterior hides a sensitive guy who helps rescue a princess, befriends a talking donkey and helps various characters from fairytales who has been evicted from their homes.

He’s Shrek, an animated commercial success starring to voices of Mike Meyers and Eddie Murphy made into a stage musical playing through Sunday at The Bushnell. The theater adaptation adds songs by Jeanine Tesori with book and lyrics by Pulitzer-Prize-winner David Lindsay-Abaire.

When Lord Farquaad (David F.M. Vaughn) evicts the three little pigs, the gingerbread man, the wicked witch, Pinocchio (Blakely Slaybaugh) and a host of other storybook characters from his kingdom, they relocate to Shrek’s swamp. Farquaad agrees to let them return if Shrek (Eric Peterson) will rescue Princess Fiona (Haven Burton) from her dragon-guarded tower to be his bride.

On his journey, the ogre is befriended by a talking donkey (an engaging Alan Mingo, Jr.) who wins the heart of the dragon (a large puppet designed by Tim Hatley, with phenomenal singing voice supplied by Carrie Compere), Shrek rescues Fiona and they set off for Farquaad;s castle. Along the way, Fiona hides a secret about why she doesn’t like the dark, but what is apparent is the affection growing between her and the ogre. Will she find true love? And can true love be blind to hideous looks?

The tale is fun and certainly entertaining for children, who filled the audience, talking and bouncing throughout. They particularly like a crass number called “I Think I Got You Beat,” in which Shrek and Fiona try to out perform each other while passing gas and belching. Lindsay-Abaire’s book and lyrics are filled with humor, though sometimes they depend on our knowing the movie, especially the part about the curse which haunts Fiona -- it’s not very clear at first.

Hatley also designs the fun costumes and sets, which for this road tour, are scaled down from the sumptuous Broadway renditions. I also don’t remember being so aware of the puppetry or being able to see the mechanics of the trick used to have a tall actor play the “height-challenged” Faquaad, but it all still is entertaining.

The cast is one of the strongest vocally we have seen at The Bushnell in a while (though the tempo is off at times). Burton has a great voice and actually sounds a lot like Sutton Foster who originated the role in New York. Both Burton and Peterson were members of the Broadway cast. Standing out with terrific singing voice is Danielle Soibelman who plays young Fiona.

The tour plays through Sunday. For tickets and information, visit www.bushnell.org.
Posted by LaurenYarger at 2:09 PM