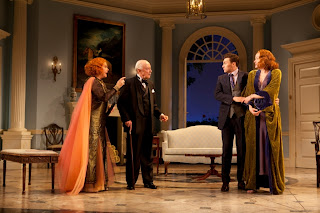 Summary:
30 years ago, Lady Catherine Champion-Cheny (Marsha Mason) left her MP husband, Clive (Paxton Whitehead), and her 5-year-old son, Arnold (Marc Vietor), to live in scandalous exile in Italy with her lover, Lord Porteous (John Horton). Now, in the late 1920s, "Kitty" returns to her former home in Dorset, England, to find that things have come full circle. Her son's wife, Elizabeth (Gretchen Hall), unable to conform to the life of the wife of a fastidious MP who is more interested in politics and arranging his elegant furniture (the lovely blue-and-white upper crust set is by Alexander Dodge) than romancing her, is about to leave him for houseguest Edward Luton (Bryce Pinkham). Even more surprising, Kitty finds that the laid-back, forgiving Clive might just be preferable now to the priggish, critical Porteous, whose good humor and chance at being prime minister seem to have left simultaneously once he hooked up with his best friend's wife. Is passion more important than responsibility? Is it all worth it in the end?

Highlights:
Paxton Whitehead. Lights up the stage and makes us laugh. A lot. So does Horton. His disgruntled mumbling and put downs of Catherine are quite amusing. Mason creates a Kitty who on the one hand, is so shallow that hunting for a lost lipstick seems the most important thing in the world, but who on the other is capable of reaching deep down inside to try to try to help Elizabeth.

Lowlights:
Some characters seem a little one-dimensional and one, a houseguest by the name of Mrs. Shenstone (Christina Rouner), seems superfluous. There's also a butler in there for a few lines (James Joseph O'Neil). The action is exposition heavy and slow-paced before the arrival of Porteous and Kitty.

For a behind-the-scenes video from the show, visit
http://www.youtube.com/user/WestportPlayhouse#p/u/0/-pNIWpqjfDM.
Posted by LaurenYarger at 12:02 PM