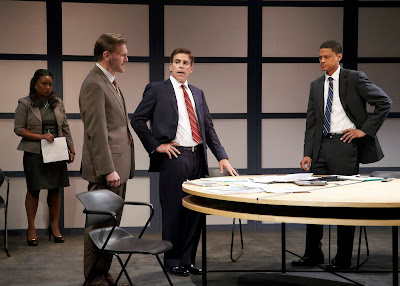 Taneisha Duggan, Jack Koenig, Ward Duffy, and Avery Glymph. Photo by Lanny Nagler
Race
By David Mamet
Directed by Tazewell Thompson
Summary:
Rich and white Charles Strickland (Jack Koenig) is accused of raping a black woman. Lawyers Jack Lawson (R. Ward Duffy) and Henry Brown (Avery Glymph) aren't sure they want to take his case, especially after the victim talks to the press and a preacher who was in the hotel room next door issues a statement swearing that he heard a racial slur during the commotion that Strickland swears was consensual sex. The men don't have a choice, however, after their law associate, Susan (Taneisha Duggan) makes an error forcing them to declare themselves attorneys of record. Lawson fortunately discovers a viable hole in the accuser's story, and he and Brown set off to mount a defense. It isn't easy. Strickland is white, after all, and that in itself is enough to make him guilty. At least that's the way African-American Susan sees it who says Strickland  "looked" guilty the minute she saw him. And race isn't far away from dealings in the office, either, as Brown, also African-American, seems to hold Susan in contempt after Lawson hired her even though she lied on her employment application, because he was afraid the firm would be sued for racial prejudice if he didn't.
Highlights:
One of Mamet's most engaging works to date. The plot twists with surprising turns and the woman, unlike in a slew of Mamet's other works, actually has a fairly decent and pivotal part in the drama.
Lowlights:
There isn't any bounce among the performers as an ensemble, and that's what is needed to make Mamet's dialog pop. An unnecessary intermission feels as long as the first act and interferes with the flow.
Information:
Race runs through July 10 at TheaterWorks, City Arts on Pearl, 233 Pearl St., Hartford.
http://www.theaterworkshartford.org/.
Posted by LaurenYarger at 1:06 PM