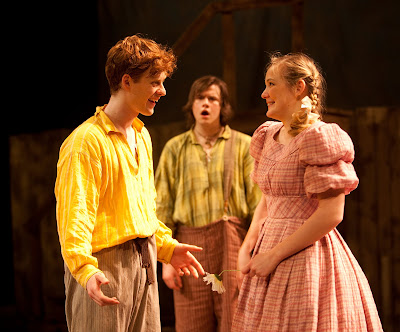 Tim McKiernan, Casey Predovic and Louisa Krause. Photo by T. Charles Erickson.
Mark Twain’s classic The Adventures of Tom Sawyer comes to life at Hartford Stage in a new stage adaptation by Laura Eason through May 9.

It takes a few moments for your brain to adjust to the fact that the red-haired kid is Tom Sawyer and the dark-haired kid is Huck Finn when everything in the literary recesses of your brain tells you it should be the other way around, but both actors, Tim McKiernan and Casey Predovic, respectively, do right by their characters under the direction of Associate Artistic Director Jeremy B. Cohen.

Louisa Krause is an engaging Becky Thatcher (and is appropriately blonde pigtailed). Nancy Lemenager seems a little young for the roles of Aunt Polly and the Widow Douglas, but the whole production, part of a national celebration commemorating the centennial of Twain’s death and the 175th anniversary of his birth as well as participating in this year’s “Big Read,” feels like a production written especially for school-aged audiences, so to little kids, she’ll probably seem old.

Ilona Somogyi creates the period costumes and Daniel Ostling designs the set consisting of smaller pieces that fly in and various larger pieces that are used and reused in different ways throughout the production (again having the feel of a production that would tour to schools). Disappointingly, the famous fence gets whitewashed with a lighting effect (Robert Wierzel, design) instead of real paint. Broken Chord Collective provides original music and sound design.