Carol Burnett at the Palace, Waterbury 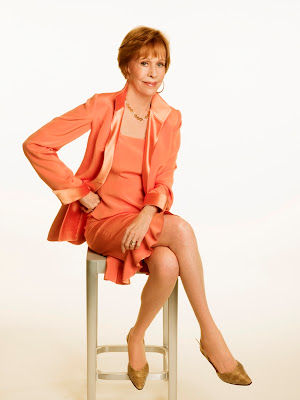 A Chance to Be in the Audience
When Carol Burnett ‘Bumps Up the Lights’
By Lauren Yarger
One of my fondest childhood memories is of being allowed to stay up and watch "The Carol Burnett Show," a mainstay for 11 years on CBS TV Sunday nights.

That the show would be funny was guaranteed (Burnett won six Emmys during the show’s 11-year run), but the real anticipation was wondering which familiar characters might be featured that night. My favorites were the spoofs of big Hollywood films, and I especially loved the “Nora Desmond" takeoff on “Sunset Boulevard” with Carol as the mad, forgotten film star falling down the stairs of her mansion while calling for her servant, Max (Harvey Korman). Regulars Vicky Lawrence, handsome Lyle Waggoner and the guest star of the week could be counted on the round out the casts in the sketches or to sing a song with Carol.

The biggest treat was when Tim Conway would guest star (before he became a regular in the ninth season) and we all would take bets in our family about how long into a sketch they would be before Tim would crack Harvey up. Usually, it wasn’t too long. If you’ve never seen the famous “dentist sketch” you don’t know the meaning of side-splitting comedy. No matter how many times I see it, I laugh until I cry as Harvey painfully tries to contain his laughter while watching Tim, the dentist, incapacitate himself with Novocaine.

The other famous sketch was a spoof of the classic film “Gone with the Wind.” It was perfectly timed as the movie had just had its television premier -- I think the night before -- and everyone had watched it (these were the days when you didn’t have thousands of choices on cable and cell phones, "on demand" and DVDs hadn’t been invented, so when a movie premiered, you watched it).
Carol, of course, was “Starlett” with Harvey as "Rat" Butler and guest star Dinah Shore as Melanie. Vicky was the “Prissy” character getting slapped every time she went into hysterics about anything. That parody was perfection and when Carol showed up wearing the green, yellow-tassel-trimmed drapes, still hanging on their rod across her shoulders,” America laughed. Rat complemented the dress and Starlett replied she’d seen it in the window and just couldn’t resist it. America split a gut.

They just don’t write them like that any more, and that’s a shame, because I’m writing this some 30 years plus after having seen those sketches and they’re fresh in my memory and still make me laugh. Carol Burnett and that show were more than just entertainment for me. They were like good friends with whom I visited once a week.

Another highlight was that at the beginning of the show, some of the pre-show warm-up when Carol would go out, ask the crew to “bump up the lights” in the house would be aired and she woud take questions from the audience. These segments, though short, were often just as funny as the written sketches. People would ask bizarre questions that triggered funny responses from Carol. Some would ask her to do her Tarzan yell; others would ask for a kiss. I often wondered what question I would ask if I ever were in the studio audience for a taping.

Now, I get to do the next best thing. I’ll be in the audience for Laughter and Reflection: A Conversation with Carol this Saturday at 8 pm at the Palace Theater in Waterbury. Patrons are encouraged to come with questions and participate in the evening’s intimate audience-interactive format

Burnett’s US stage tour comes on the heels of her new release “This Time Together: Laughter and Reflection,” a book in which the 76-year old actress-comedian recounts some of her favorite Hollywood memories. She provides behind-the-scenes insight into some of her career highlights, including her trademark Tarzan yell, but also gets serious when writing about the death of her daughter Carrie Hamilton, who died of cancer in 2002, at age 38.

My question for Carol isn’t really a question for the session with the audience, because it’s more of a statement than a question. I wonder whether she has any idea how much happiness she has brought to so many lives for so many years and that mine is one of them.

The International Performing Artist Association must have some idea, though, as the organization has awarded its 2010 George Burns Lifetime Achievement Award to Burnett.

Tickets for Laughter and Reflection sponsored by the Bank of America Celebrity Series and WTNH/MyTV9 are $125, $75, $65 and $45 and may be purchased by phone at 203-346-2000, online at www.palacetheaterct.org, or in person at the Palace Theater Box Office, 100 East Main St. in Waterbury. Groups of 20 or more qualify for discounted rates and should call the Group Sales hotline at 203-345-2002.

Before the show, a 6 pm dinner will be held in the Poli Club, located on the theater’s mezzanine level. Dinner is $40 per member and $50 for non-members (including tax, gratuity, coffee and tea). A cash bar is also available. Seating is limited, and reservations may be made when purchasing tickets through the Box Office.

Check back after the show. I'll write about the experience, probably being so glad we've had this time together. After I stop laughing.
POST SHOW NOTES: It really was a fun show. Carol looks great and still is as funny as ever. She took questions from the packed audience at Waterbury's Palace (many of them a little bizzare, focusing on hardship, given the comedic theme of the night) and showed clips from the show, including the dentist and and "Went with the Wind" sketches (if you could hear anything -- some of the worst sound design I've ever witnessed in a professional performance with problems on Carol's mike, the audience mikes and the video all night long. Fortunately my seats were close enough to hear Carol directly from the stage. Overall, one for the theater memories. It isn't often that you get to relive part of your childhood.
Posted by LaurenYarger at 11:53 AM