Hartford Stage Breaks Ground on Phase I of Expansion Project 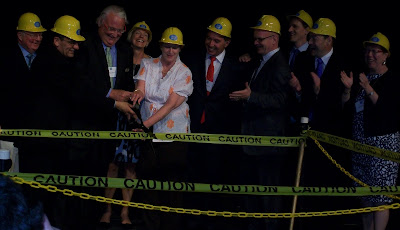 By Lauren Yarger
I've been blown away many times by what takes place at Hartford Stage, but this is the first time the stage itself was blown away too....

In a dramatic groundbreaking with special effects that blew a hole in the stage, Hartford Stage began phase I of construction on a two-phase expansion program that will increase staging options and expand dressing room, rest rooms and the lobby at the 33-year-old facility at 50 Church St. in Hartford.

Gov. M. Jodi Rell and Hartford Mayor Eddie Perez were among the dignitares on hand May 26 for the ceremony. Rell said the expansion, for which helped secure state funding (a $2 million commitment from the State Department of Economic and Community Development was announced in February, 2008), is an investment that will pay dividends not only for the theater and Hartford, but for the state as well. Phase I has been budgeted at $4 million. An "audition project" resulted in the selection of Mitchell Kurtz as the project's architecht, Artistic Director Michael Wilson quipped.

While the construction is taking place, Hartford Stage's summer Broadway series and the first show of the 2010-2011 season will be presented at Kingswood Oxford School in West Hartford. The renovation is expected to be complete by mid September, with the season's second show, Antony and Cleopatra, starring Kate Mulgrew and John Douglas Thompson, reopening the theater Oct. 7.

Here is some more information about the project: 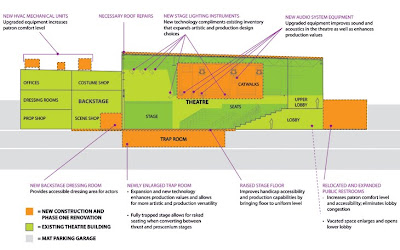 The first phase of construction taking place this summer will primarily address four priority areas:
-- Improvements to the theatre's accessibility for both audience and actors. The stage floor will be raised to make handicap seating more accessible; ramps will no longer be necessary to reach seats. A backstage dressing room will be constructed at stage level to allow improved accessibility for actors.
-- Audience amenities. This will include relocating and expanding the public restroom facilities. Restrooms will expand into space in the MAT garage, which in turn will allow enlarged space in the theatre's lower lobby to alleviate congestion. The new, accessible, restroom facilities will more than double the number of stalls in both the ladies' and men's rooms.
-- Infrastructure improvements. This will include new HVAC Equipment to improve comfort for patrons and actors, electrical systems will be cleaned and refurbished, and the roof will be repaired.
-- Production enhancements. This includes new theatre lighting equipment, a new theatre Audio system, and an expanded trap room which will allow trap openings any where on the stage. The new trap system will allow for easy conversion from thrust to proscenium houses, allowing for greater flexibility and more artistic opportunities, and improved sightlines for the audience.

The entire project is slated for completion by the fall of 2013, prior to the celebration of the theatre's 50th Anniversary. Critical campaign milestones must be achieved before a firm timeline can be developed.

The scope of Phase II includes:
== Expansion and renovation of the lower and upper lobbies, which will significantly improve the patron experience and provide space for receptions and meetings, as well as provide a more animated entrance to the facility and improve the Church Street streetscape.
--Renovation to the theatre's interior, including new walls to improve acoustics, new theatre seats, and a new house light system.
--Installation of an elevator to allow accessibility for handicapped patrons and access to seats in the upper level of the theatre.
--New interior finishes throughout the lower and upper lobbies.

Posted by LaurenYarger at 5:32 PM