Theater Review: How to Succeed in Business Without Really Trying -- Goodspeed 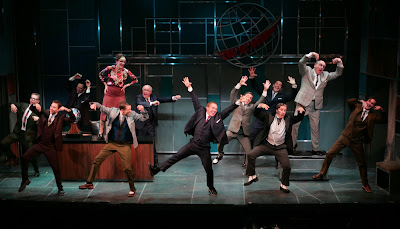 The cast performs "The Great Big Brotherhood of Man. Photo by Diane Sobolewski.
Goodspeed Production Knows How to Succeed
By Lauren Yarger
It’s not clear how hard Brian Sears is actually trying, but he sure is a success playing a window washer who climbs to the top of the corporate ladder in How to Succeed in Business Without Really Trying at Goodspeed.

Director Greg Ganakas has assembled a strong cast who sings (music by Frank Loesser) and dances (clever and tight choreography by Kelli Barclay) their way through the silly tale of the rise of J. Pierpont Finch who succeeds in business by following the steps laid out in an instruction manual (the recorded voice of the narrator is supplied by Sen. Christopher Dodd -- is theater a new career path for the outgoing politician?) Finch also finds success in a romantic relationship with secretary Rosemary Pilkington (Natalie Bradshaw) on his journey.

The action takes place on a retro-looking, paneled set (the year is 1962, design by Adrian W. Jones), with period costumes by Gregory Gale. Lighting Designer Paul Miller lends a nice touch with a spotlight on a smirking Finch every time one of his manipulative get-ahead strategies earns him another advantage or promotion. It’s a fun show, staged nicely on the Goodspeed stage.

Standing out is a very funny Tom Deckman as Bud Frump, the wimpy nemesis of Finch who runs to his mother, the CEO’s sister, for help whenever he’s in trouble at the office.

Giving nice turns are Ronn Carroll as the company’s CEO J.B. Biggley, Nicolette Hart as Biggley’s bombshell mistress Hedy LaRue, who with a typing speed of 12 words a minute, isn’t very successful holding a position as a secretary in the company, and Jennifer Smith as Biggley’s uptight executive assistant Miss Jones.

On the musical side (Michael Flattery, direction), some tightening is needed as a number of vocals don’t come in on the right beat and voices on some ensemble numbers aren’t together. The orchestra does a nice job playing the Loesser score which includes familiar tunes like “I Believe in You” and “The Brotherhood of Man.”