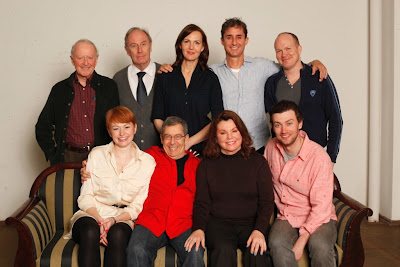 
Many years ago, Lord Champion-Cheney (Whitehead) was abandoned by his wife, Lady Catherine (Mason), who ran off to Italy with her lover. Bringing matters full circle, his stuffy son Arnold is now involved in a love triangle of his own as his bored wife is smitten with a handsome house guest. “The Circle” explores how history often is destined to repeat itself.

In addition to Mason (films “The Goodbye Girl” and “Cinderella Liberty”) and Whitehead (Broadway’s The Importance of Being Earnest, My Fair Lady and Noises Off), the cast includes Gretchen Hall as Elizabeth; John Horton as Lord Porteous; James J. O’Neilas Butler; Bryce Pinkham as Edward Luton; Christina Rouner as Mrs. Shenstone; and Marc Vietor as Arnold Champion-Cheney.

Director Nicholas Martin previously directed Westport Country Playhouse’s The Substance of Fire and A Cheever Evening. On Broadway, he directed Present Laughter, Butley, Match, Hedda Gabler, The Rehearsal and You Never Can Tell. He is the former artistic director of the Williamstown Theatre Festival and Boston’s Huntington Theatre Company.

Subscriptions to all four plays are available for preferred seating and discounts up to 45% off single ticket pricing. Students and educators are eligible for 50% discounts. All Friday evening performances are $25 for patrons aged 35 and under. Groups of 10 or more save up to 30%. For group sales information call 203-227-5137, x120.