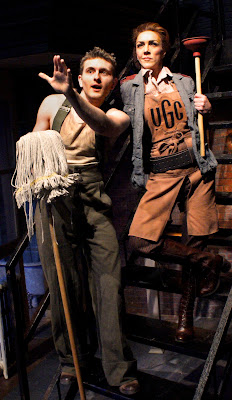 Ken Clark and Andrea McArdle. Photo by Dana Haddad
﻿
Urinetown
CT Rep at Harriet Jorgensen Theatre
Music and Lyrics by Mark Hollman
Book and Lyrics by Greg Kotis
Directed by Paul Mullins
Chroeography by Gerry McIntyre
Summary:
A water shortage has made it illegal to urinate, except in official facilities. They are owned by corporate mogul Caldwell B. Cladwell (Bob Walton) and #9 is operated by Peneope Pennywise (Andrea McArdle) and her assistant Bobby Strong (Ken Clark), Those who break the rules, or who can't come up with the cash to pay for using the facilities are carted off to Urinetown by Officer Lockstock (Robert Thompson, Jr.) and his sidekick, Officer Barrel (Kevin Coubal). Everything changes, however, when Bobby meets Cladwell's beautiful daughter, Hope (Alison Barton), and begins a revolution to free the people. Trying to figure all of this out is Little Sally (Alexandra Perlwitz).
Highlights:A really tight, whimsical book, clever lyrics and catchy music. This production has some clever gags original to it, including one triggered by McArdle's history with the musical Annie. It's a treat to get to se her on a Connecticut stage. Clark and Barton lend nice voices to the lead roles and standing out, in a minor role, is Coubal. He brings an over-the-top panache to the role remniscent of the characters in the original Broadway production and appears to be having a lot of fun doing it. The cast nicely executes the choreography -- the Cop Song is particularly nice.
Lowlights:The pace is off and a number of the jokes are lost.