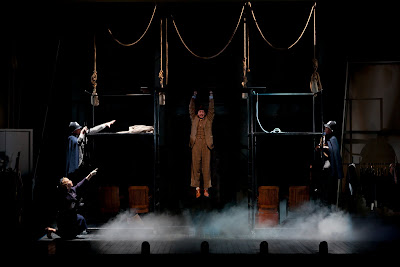 Alfred Hitchcock's The 39 Steps
Hartford Stage
Adapted by Patrick Barlow from the film, taken from the novel by John Buchan
Directed by Maxwell Williams

Summary:
A tongue-in-cheek retelling of the classic film about a man who stumbles upon an espionage plot to smuggle vital war time secrets out of England to Nazi Germany, complete with a chase aboard a speeding train. It will make you laugh whether you've seen the film or not and if you're a fan of the film or Hitchcock, there is a lot of humor especially for you.

Highlights:
Very clever staging and spoofy effects (including lighting with stick puppets). Robert Eli stars as the man pulled into the intrigue of dozens of characters -- some created at the literal drop of a hat -- played by the other three cast members: Steve French, Noble Shropshire and Christina Pumariega. All are skilled.

Lowlights:
The pace is off, so that some of the gags and sarcasm seem staged instead of spontaneous.

More information:
The 39 Steps runs through May 1 at Hartford Stage, 50 Church St., Hartford. Tickets are $23 to $69 with various discounts available and can be purchased by calling 860-527-5151 or by visiting www.hartfordstage.org.
Posted by LaurenYarger at 6:49 AM