A Flea in Her Ear Opens at CT Rep 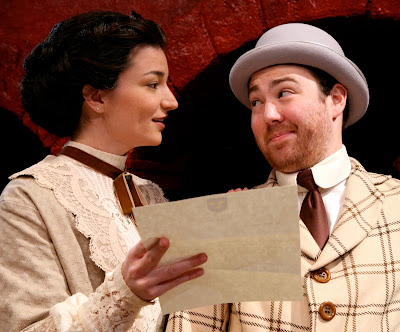 Connecticut Repertory Theatre (CRT) presents Georges Feydeau’s A Flea In Her Ear, adapted by David Ives, Dec. 2 - 11 in the Harriet S. Jorgensen Theatre on the Storrs campus. For tickets and information, call 860-486-4226 or visit www.crt.uconn.edu.

Mistaken identity, revolving beds and an improbable, hysterical plot provide the riotous foundation for Feydeau’s bedroom farce. The amorous antics are unleashed with mathematical precision to create a fast and furious, sexy comedy featuring a suspicious spouse, a lusty lothario and a hot-blooded Spaniard – all chasing each other through this hormone-powered, rollicking romp.

Raymonde Chandebise misguidedly concludes her husband Victor is having an affair because of their recent declining romance and his suspenders mysteriously showing up in the mail. To prove her suspicions, Raymonde solicits her friend Lucienne to write an anonymous letter to her husband inviting him to a romantic rendezvous at a seedy hotel. Victor misinterprets this letter and sends his best friend Tournel, a notorious womanizer, in his place. Hilarity ensueswith mistaken identities, revolving beds, and more secret liaisons lead to confusion and comic mayhem.

Director Art Manke said, “A Flea In Her Ear is a perfectly crafted farce that never fails to elicit gales of laughter whenever produced. I’ve wanted to direct it for a long time, and am delighted to have extraordinary designers and a brilliantly talented and very attractive cast bringing it all to life.”

Manke is a co-founder and former artistic director (1991-2001) of A Noise Within, L.A.’s acclaimed classical theatre company, where he staged the work of Shakespeare, Moliere, Wilde, Coward and Sophocles.

The cast will feature Equity actor Leigh Miller (Camille). Most recently, Leigh collaborated and performed in a five person As You Like It set on Low-Flying Trapeze. Leigh also played Henry VIII in A Man for All Seasons at The Arvada Center and Adam in the World Premiere of Yankee Tavern at Curious Theatre. Graduate acting students Gretchen Goode as Raymonde Chandebise, Ryan Guess as Tournel and BFA acting student Tom Foran as Victor Chandebise, also are featured.