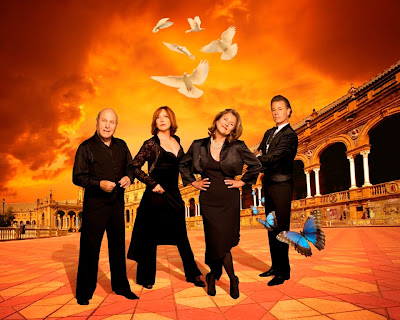 Audiences will get jazzed this holiday season when 10-time Grammy Award-winning The Manhattan Transfer brings their Christmas Show to the Palace Theater in Waterbury on Wednesday, Dec. 15 at 7:30 pm.

Vocalists Cheryl Bentyne, Tim Hauser, Alan Paul and Janis Siegel celebrate the holiday season by lending their ageless vocal harmonies to a collection of familiar and best loved Christmas classics. Additionally, the group is also celebrating its 40th Anniversary with the highly anticipated release of "The Chick Corea Songbook." The vocal quartet’s first new record in five years was inspired by the classic work of jazz great Chick Corea, and features fresh and exciting vocal interpretations of his popular compositions, including “Spain” and “500 Miles High.”

The platinum selling, world-wide chart topping super group, widely renowned for broadening the musical landscape with their innovative, genre defying sound, made Grammy history in 1981 by becoming the first group to win Grammys simultaneously in both the jazz and pop categories. The group also put out the second most honored album in pop history in 1985, with Vocalese, earning an impressive 12 Grammy nominations, surpassed only by Michael Jackson’s "Thriller."

Before the performance, a 5:30 pm pre-show dinner will be held in the Poli Club, located in the Mezzanine Level of the theater. Dinner is $40 per member and $50 for non-members, which includes tax, service fee, coffee and tea. A cash bar is also available. Seating is limited and reservations may be made when purchasing tickets through the Box Office.

Tickets for The Manhattan Transfer Christmas Show can be purchased by phone at 203-346-2000, online at www.palacetheaterct.org, or in person at the Palace Theater Box Office, 100 East Main St. in Waterbury. Groups of 20 or more qualify for discounted rates and should call the Group Sales hotline at 203-346-2002.
Posted by LaurenYarger at 6:22 PM